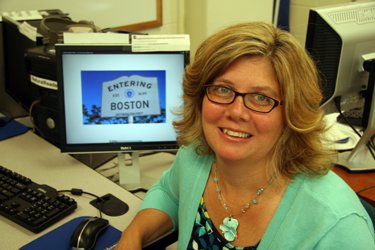 Noreen Fantasia, a Northern Essex Community College reading tutor, had never created a Power Point, movie, or video in her life, but that didn’t stop her and two family friends from creating a six-minute, YouTube video tribute titled “Boston State of Mind” that has already received nearly 8,000 views.

The 47-year-old mother of two got involved in the project, which was created to draw attention to One Fund Boston, after her husband’s friend Pat Garrett of Derry, NH, wrote new lyrics to the tune of Billy Joel’s song, “New York State of Mind” which appeared on Joel’s album “Turnstiles” in 1976. Garrett, a personal trainer who had never written lyrics before, was inspired while working out and listening to the song just after the Boston Marathon Bombings.

His attempt at singing the new lyrics to Joel’s melody was met with only the frankness that a longtime friend can offer.

“I told him his lyrics were incredible, but his voice not so much,” Fantasia of Salem, N.H. joked. “I suggested we ask my friend’s 12-year-old daughter, who has performed before, to sing the song.”

Garrett agreed that a more experienced singer would better showcase the lyrics. Enter Emma Stanganelli also of Salem, N.H., who, after a failed attempt to record the song in a bathroom ala Bieber-style, completed the recording in less than an hour at a Haverhill recording studio.

After that, Fantasia went to work. She took 97 images Garrett had collected and created a Power Point using the new recording. Unfortunately, once it was uploaded the images and music didn’t sync. She recreated it using Movie Maker. Once the image was uploaded to YouTube, a video sharing website, it quickly started receiving attention.

After several hundred hits, a friend suggested they contact Billy Joel and receive his approval. They did and Joel, who famously performed the song during the Performance for New York City, following the 2001 attack on the Twin Towers, gave them the nod to use the melody.

Fantasia says she is glad to be a part of the video, which depicts iconic mages of Boston including The U.S.S. Constitution, the Freedom Trail, the Hatch Shell, and Fenway Park.

“What I like about the video is that it shows what we love about Boston. I grew up in Revere and worked for 18 years in Boston,” she said. “This has been a really positive experience.”

Here is the video.