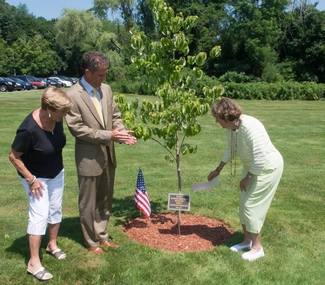 For Andover resident Betty Jaffe, a member of the board of the Women of NECC, the Boston Marathon had been a family affair; family members ran it and she often manned a water table near the finish line. So she thought it would be appropriate, since the college now hosts an annual 5K run, to honor the victims of the marathon bombings in some way.

Jaffe raised the idea at the Women of NECC’s annual meeting in May. The board concurred and voted to purchase a dogwood tree, which flowers each April, the month the Boston Marathon is held each year.

“I thought it would be nice to have a tribute in memory of all the people lost and injured during the Boston Marathon tragedy,” said Jaffe.

The tree is planted across from the B Building, along the route of the NECC Annual Campus Classic 5K & Fun Run road race. The site was selected by Lindsey Mayo and Margaret Pothier, co-chairs of the race.

A small plaque will indicate that the tree was planted by the Women of NECC in honor of the Boston Marathon victims.

“I was taken by surprise at the recommendation and motion made by Betty and felt it was an extremely kind and thoughtful gesture,” said Jean Poth, NECC’s vice president of institutional advancement. “All board members overwhelming responded ‘yes’ to the motion. We will now hold the memory of that day at NECC for many years to come.”

The Women of Northern Essex Community College is a volunteer organization dedicated to assisting Northern Essex Community College and its students. The organization generates funds for student scholarships and special projects by conducting a variety of fundraising events throughout the year, including a Fall Membership Tea and a June Gala Open House event. 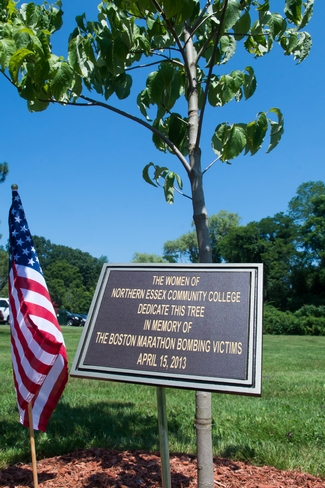