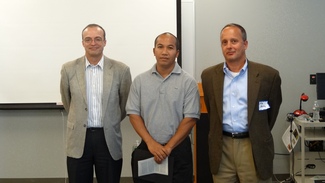 Graduate Do Brach of Lawrence, MA with Bill Heineman, NECC vice president of academic affairs on the left and Mike Munday, CEO of Arwood Machine Corporation on the right. Munday was the guest speaker at the graduation and he has already hired Brach in his company’s engineering department. A mechanical engineer, Brach speaks three languages including English, Khmer, and French.

The diverse group of graduates included a former member of the Russian navy who has been working as a cabinetmaker, a financier with a bachelor’s degree, and a mechanical engineer who speaks three languages.

This is the second class to graduate from the program which was launched in January of 2012 in partnership with Whittier Regional Vocational Technical School. The program was created to meet employer demand for individuals who are trained to operate computer numeric controlled (CNC) machines which are used to produce metal parts with high precision.

Michael J. Munday, CEO of Arwood Machine Corporation in Newburyport, a graduate of Northern Essex, was the guest graduation speaker. Munday shared the great need for skilled employees in these fields and outlined the many career opportunities that are available. “There are careers available in the machine shop, administration, accounting, purchasing, human resources, planning, and production,” he said. “Many positions are open. We need to find qualified candidates or we will miss the opportunity to recover the economy.”
Munday has already hired Do Brach of Lawrence, MA, one of the graduates, and he hopes to hire more in the future.

George Moriarty, Northern Essex’s executive director for workforce development and corporate relations, thanked the many local partners who helped make this program a success, including Whittier, the Merrimack Valley Workforce Investment Board, ValleyWorks Career Center, and local employers; instructor Joe Barrett; and, most importantly, the graduates. He also recognized Greater Lawrence Technical School which partnered with the college on the first session of the program. 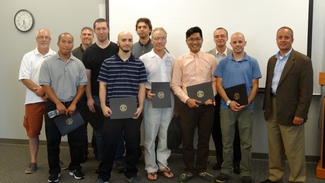 “After decades of decline, manufacturing is enjoying a significant rebound in Massachusetts and across the nation,” Moriarty said. “Low-paying factory jobs have been replaced by careers… careers with competitive wages in advanced manufacturing fields such as semi-conductors, aerospace, plastics production, and medical equipment.”

Students in the program took classes in foundation studies and in theory and applications at NECC Riverwalk, 360 Merrimack St., Lawrence, and received hands-on machining training at Whittier. They learned to program and operate machines, perform basic assembly, and inspect finished products.

A new CNC Machine Operator Program will begin in September. Those interested are invited to contact Renee Deyermond, rdeyermond@necc.mass.edu or 978 659-1223.