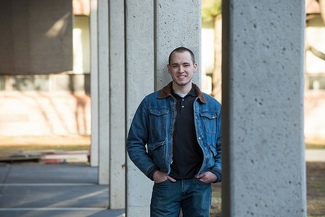 David graduated in May 2013 with an Associate of Science Degree in Engineering Science with a focus on Environmental Engineering.

Price, curriculum, and transferability were all equally important to David Bowie when he was considering which college to attend. He found all three at Northern Essex.

The 2007 Timberlane High School graduate knew in high school that he wanted to study environmental engineering since he was strong in both math and science. While he was initially attracted by NECC’s affordability, he also wanted to maximize his time and earn credits that would transfer to a bachelor’s degree program.

“I liked the transfer agreements Northern Essex had in place,” says the Plaistow, New Hampshire resident. “I also really liked the curriculum. It gave me everything I needed to transfer and took care of a lot of the expense. Money was a top issue for me. For the price … the experience you get at NECC is great.”

The nurturing environment he found at Northern Essex was a bonus, he said.

David graduated in May 2013 with an Associate of Science Degree in Engineering Science with a focus on Environmental Engineering.

While a student, he tutored in the NECC math center. He was dual enrolled at NECC and UMass Lowell before he enrolled full time in UMass Lowell’s Bachelor of Science in Environmental Sciences Degree program. He was pleased to learn he was able to transfer more than 60 NECC credits toward his bachelor’s degree. Eventually, he will pursue a master’s, but for now he is hoping for a career in environmental management.