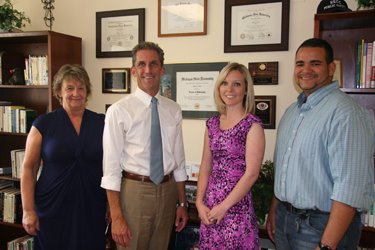 Fagan, an administrative assistant for NECC’s Division of Foundational Studies and Liberal Arts & Sciences for just one year, was nominated by her colleagues who praised her high work standards, service-oriented approach to the job, and a friendly, cooperative, and courteous manner. “She brings a positive and can-do attitude to her work and manages complex organizational tasks competently and with apparent ease,” they wrote.

She holds a Bachelor of Science in Business Management from Southern New Hampshire College.

Lara has also worked at the college for just one year as a research assistant. She was nominated by Ellen Wentland, associate dean of academic and institutional effectiveness, who lauded Lara for her strong desire to learn and grow in her position. “She regularly tackles projects that require acquiring additional skills, and welcomes opportunities to expand her competencies and to become involved in challenging projects,” wrote Wentland. This nomination was supported by Gisela Ramirez-Nash, director, Title V/Student Success Programs..

Lara holds a Bachelor of Science in Elementary Education and Psychology from Salem State and a Master of Education in School Counseling from the University of West Alabama.

Rivera is a systems analyst in the Informational Technology Network Operations Center. He began working at NECC as a work study student, quickly progressing through the ranks. He was nominated by several of his colleagues who cited his commitment to staff, faculty, and students alike. They praised him as a great co-worker, and troubleshooter who is passionate about his work.

He earned his Associate of Science in Electronic Technology: Computer Networking Engineering from NECC and a Bachelor of Science in Management and Management Information Systems from UMass Lowell.