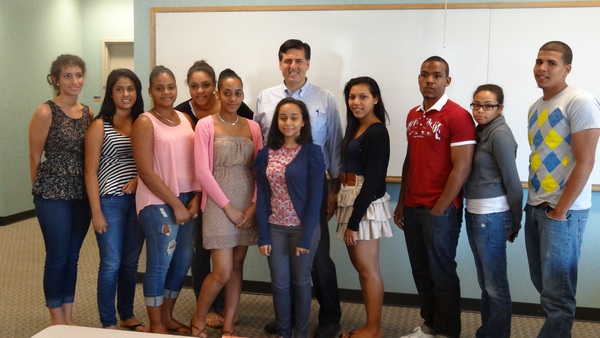 Students in Northern Essex Community College’s Summer Bridge Program had a special treat on Wednesday, August 21 when Mexican American writer Sergio Troncoso visited their classroom at the Dimitry Building in Lawrence to discuss a broad range of topics from how to become a better writer to cultural assimilation to college success tips.

The author of essays, short stories, and five novels, Troncoso told the students that he likes to explore the theme of families in his writing, including “what makes up a family, what disintegrates a family, and what brings them together again.”

Students had just read Troncoso’s novel “From this Wicked Patch of Dust”, which Troncoso’s website describes as “a story about the Martinez family who begins life in a border shantytown and struggles to stay together despite cultural clashes, different religions, and politics after 9/11.”

Troncoso told the students that his book is largely autobiographical.  “My parents came from Mexico and I grew up with nothing,” he said.  I would go to the public library and read, and it developed this muscle between my eyes.  The more you work mentally the easier it becomes.”

Troncoso went on to attend Harvard and he now teaches at Yale in addition to his writing.

He says that being bilingual gave him an academic advantage at Harvard since he could do research in Spanish.  He also advised students to learn how to write a good research paper, to reach out to faculty and staff with questions, and to embrace hard work.

“It’s all about the choices you make in life.  Some of the kids I grew up wasted time, doing drugs, while others became doctors and lawyers.  There is no magic to going from having nothing to going to Harvard, you have to sacrifice.”

The NECC Summer Bridge program is a free enrichment program designed to help ease student’s adjustment to college life and build a foundation for academic success.  Participants work on improving math and English language skills and are introduced to the resources available at Northern Essex.

Students participating in the Summer Bridge Program included Nathanais Madera, Rackeley Guzman, Genesis Blanco, Framilda Angelina, Katherine Santana, Kiara Colon, Wandy Polo , Johnny Rosa, Yhadira Tiburcio, Orlando Rosario, and Pedro Gutierrez.  All are from Lawrence except for Madera who is from Methuen and Gutierrez who is from Haverhill.

To be eligible for the program, students must be a Latino high school graduate with a 2.5 GPA or better and enrolled at NECC for the fall.  THE NECC Bridges Program is funded in part by a grant that NECC received form the United States Department of Education under the Title V Developing Hispanic-Serving Institutions Program and a Massachusetts Performance Incentive Grant.  Troncoso’s visit was paid in part by support from the NECC Fund and the Lawrence Cultural Council.