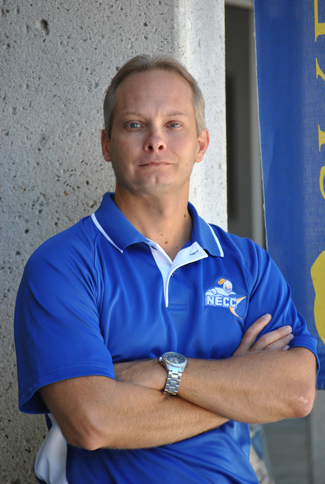 Formerly the NECC assistant coach, Bass assumed his new role in July and has been putting on a full court press to attract players ever since.

“I’ve spent the summer trying to give the program more visibility,” says the Reading resident. “I want players to look at Northern Essex as a viable alternative financially academically, and athletically. I am making myself available to students to talk about the school and the program. I want them to know what the college has to offer them on and off the court.”

A general practice attorney by day, the 39-year-old has been teaching and coaching basketball since 1998. A high school basketball player when he was growing up in Fort Lauderdale, Florida, Bass never lost interest in the sport. He was teaching basketball when he was pressed into service as a coach by a friend, Kevin Barboza, who operates the Bay State Blizzard basketball program. He went on to coach AAU teams for girls in grades 6 to 11 before taking on the role of assistant NECC coach.

“Several years ago I filled in coaching and found I really liked it,” he said. “I like being on the sidelines as much as I like the instructional piece. When the coaching position opened up I viewed it as the next step in my coaching development,” said the father of two (you guessed it) girls.

Bass, who has taught both boys and girls, says he finds girls to be better listeners and more detail oriented. “In general they want to do well by their coaches and would run through a wall for you.”

Bass, with his quiet demeanor, naturally, would like to see the team restored to its glory days, but that isn’t his primary goal.

“Don’t let my quiet disposition fool you. My intensity is no less. I want to get the most out of my players as possible…the most mentally, physically, and psychologically. I want to get them to embrace the work.”

He is hoping to see a variety of talent at his late September tryouts. Before then he plans to host a meet the coach session. Bass says he realizes NECC student athletes are sometimes balancing family and work in addition to academics and athletics.

“I’m willing to be creative and work with the players,” he says. “To do whatever is going to get us all together and working …that’s what’s important.”

For information on the basketball program contact Brent Bass at bbass@necc.mass.edu or NECC Athletic Director Sue MacAvoy at smacavoy@necc.mass.edu