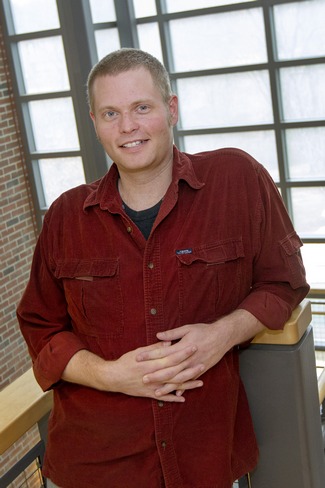 After graduating from Greater Lawrence Vocational Technical School 15 years ago, Methuen native Mark Hargreaves trained to be an auto mechanic, a career which worked well for 10 years, until he started to think about returning to school.

When he was laid off from his job as a mechanic for a forklift company, he decided it was time to pursue his dream. Using his job training funding, he enrolled at Northern Essex.

According to Professor Russ Gouveia, Mark was serious about his education from the start, excelling in the classroom and organizing student study groups.

He was soon recruited to serve as a supplemental instructor, leading study sessions for students enrolled in computer science courses, and as a computer science tutor. “Everybody seeks out
Mark because he’s so helpful,” says Professor Gouveia.

When the college created a collegewide information technology committee, Mark was invited to serve as the student representative. He also volunteered to help college staff set up computer labs over summer and winter breaks.

“My goal was to get as much experience as possible so that I would have a lot of different skills to offer employers when I was ready to graduate,” says Mark.

His strategy worked perfectly. In late April, Mark was hired to work in desktop support for Worldcom in Pelham, New Hampshire and his start date was four days before he graduated with his associate degree.

Mark graduated from Northern Essex with high honors in May 2013. He plans to transfer to Merrimack College or Southern New Hampshire University to pursue a Bachelor’s Degree in Computer Science while working.

“I came to Northern Essex looking for the skills that would lead to a new career and that’s exactly what I got,” says Mark.