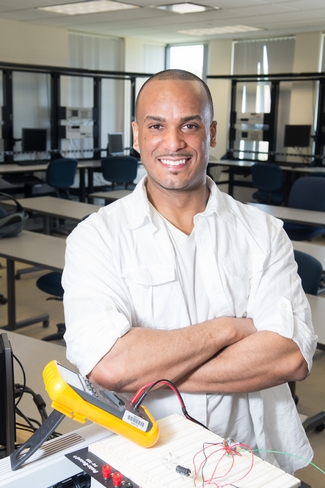 Lawrence native and Northern Essex Community College graduate Emmanuel “Manny” Bernabe could teach a course on how to balance work and college life.

For the past six years, the 26-year-old has worked as a full-time security guard at NECC’s
Lawrence Campus, where everybody knows his name. He is also on call for a part-time security position and manages to take two, three, and sometimes four college courses each semester.

A 2004 graduate of Lawrence High School, Manny knew he wanted to attend NECC because it was what he could afford and where he could explore academics. Since he wasn’t quite sure what he wanted to study, he figured Northern Essex was the best place to experiment with majors. First he studied physical fitness and then psychology. But when he enrolled in a Physics I course, everything changed.

“I just really liked it. I connected with it. Then I knew I wanted to major in physical science and eventually computer engineering,” he says.

“All the faculty and staff were really helpful and the tuition was affordable,” he says. “It allowed me to save money so I could transfer to a four-year school. It wasn’t easy, but I learned not to procrastinate and to budget my time.”

His second favorite subject is English literature which is admirable for someone raised in
a Spanish-speaking household who didn’t learn English until he was in the first grade.

“It took a lot of practicing, reading, and researching,” he says, “but I never gave up. I had
a lot of faculty motivate me to never give up.”

Eventually, Manny says, he would like to work on an engineering team designing the latest cell phone or computer.