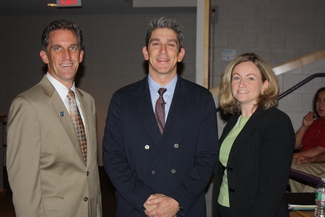 Cuban American poet Richard Blanco received what is considered the highest honor a poet can receive when he was invited by President Obama to read a poem he had written at his second inauguration last January.

After being asked to write an inaugural poem, Blanco said he had “lots of false starts.” He wrote three poems in total and it was a couple of days after the Sandy Hook tragedy that he became inspired and wrote “One Today”, the poem which he shared with the nation and that Hector Tobar of the LA Times called “an intimate and sweeping celebration of our shared, single identity as a people.”.

While in Lawrence, Blanco discussed his experiences writing the inaugural poem, his writing process, and his thoughts about navigating a cultural identity between two worlds: his Cuban heritage and his place in the United States.

He said reading his inaugural poem was a defining moment for him. “On Jan. 21, I found home. I realized home was here. It was an experience I hadn’t expected.”

Blanco also penned “Boston Strong” a poem honoring the victims of the Marathon Bombing that was presented on May 30 at the TD Bank Garden as part of the benefit concert and at Fenway Park at a Red Sox Game.

Born in Madrid, Spain, to Cuban exiles, Blanco was just weeks old when his family moved first to New York City and later Miami, Florida, where he was raised and educated.

Since childhood—Blanco says— he felt caught between two worlds: the imaginary world of his Cuban heritage as seen and heard only through his parents nostalgic stories about the “homeland” and the other imaginary world of the “real” America that he envisioned from TV shows and history book—a very different place from the predominantly Cuban community where he grew up.

He has a bachelor of science in civil engineering as well as a master in fine arts in creative writing from Florida International University. He started his career as a civil engineer and came late to poetry but finds the two disciplines complement one another. “I think I’m a better engineer because I’m a poet and a better poet because I’m an engineer.”

Blanco now lives in Bethel, Maine, and, in November, his memoir titled “All of Us, One Today” will be released.

The next presentation in the NECC White Fund Lecture Series will be by Carlos Contreras, a slam poet, on Wednesday, Oct. 9, beginning at 8:45 a.m. at Lawrence High School.