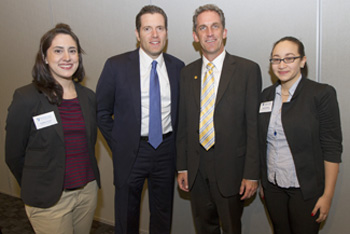 Chairman Dempsey reported that the state is “off to a good start” this fiscal year with revenues that are $139 million above benchmark, increased cash reserves, and a recently upgraded bond rating—double A plus– which is the highest in the history of the Commonwealth.

“We are well positioned, but we need to take a practical approach and invest in things like education that are important,” said Dempsey.

In recent years, the state’s investment in K-12 has grown significantly from $1.3 billion in 1993 to $4.3 billion today, but the higher education budget has not grown at the same rate, according to Dempsey. 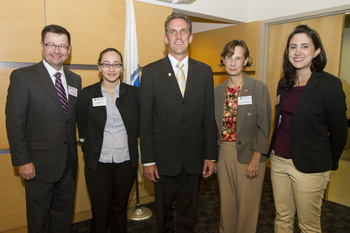 “We haven’t done enough for higher education. We know the good work that happens here and I think we will see an ongoing effort to keep your budgets up in the years ahead.”

In the past three years, Northern Essex has added three new STEM programs that were created in collaboration with local employers, including associate degrees in laboratory science with a focus on biotechnology, environmental science, or chemical analysis, and the medical laboratory technician, and an ophthalmic assistant certificate.

“We’re partnering with local employers to give our students the skills that will lead to careers when they graduate,” said Glenn.

Northern Essex students Emily Ramirez, an engineering science major from Lawrence, and Lindsey Curole of Merrimac, a recent graduate of the Lab Science Program shared their stories with legislators. A 2010 graduate of Lawrence High School, Ramirez is balancing her studies with working 30-hours a week for the Microsoft store in Salem, NH. Curole is studying full time at UMass Lowell while working part time as a quality control technician for Charm Sciences, a position she received after completing her internship.

On the financial front, President Glenn started with the good news, pointing out that Northern Essex currently has the third lowest cost of the Commonwealth’s 15 community colleges with annual tuition and fees for a full-time student totaling $4710. 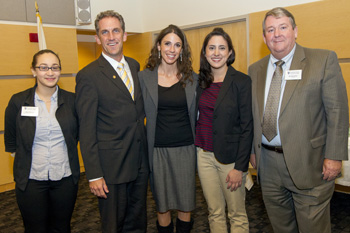 “We’re one of the lowest cost colleges in the state, and we’re proud of this but it’s coming at a tremendous price,” said Glenn.

When you look at the college’s net asset value, which measures the condition of a campus, the college is last in the state, falling in the “catch-up” stage which indicates that buildings need significant repairs.

“We have a $90 million deferred maintenance back log. It’s not that we don’t work at it, we do, but we need to have a more aggressive strategy as far as cost so we can address this.”

“We are fortunate to have a talented group of legislators representing us in the Merrimack Valley,” said Glenn. “Your leadership brings home results for Northern Essex and our region.”