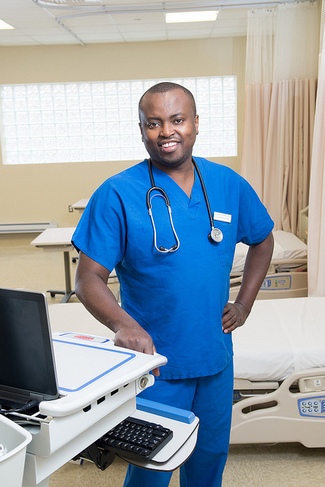 Born and raised in Kenya, Apollo emigrated to the U.S. when he was 23. Almost immediately he enrolled in a certified nursing assistant program and started working at a nursing home and a home health agency. Apollo found he liked the personal care he could offer his patients, but he wished he could do more. With that in mind, he completed his GED and began taking college courses. Eventually, he enrolled in NECC’s Certificate in Practical Nursing Program and graduated in 2010.

“As a CNA I was limited in what I could do,” he says. “As an LPN my role was expanded and I was able to make a greater impact. I believe one of my gifts is giving encouragement to the patients.”

But even then, he knew he wasn’t done with his education. While he continued to work as an LPN, he realized he wanted even more responsibility.

“I always felt like I wanted to be more of an advocate for my patients,” says the 37-year-old. “I knew I needed to go back to school.”

He enrolled in the NECC iHealth Nursing Advanced Placement: LPN to ADN – Evening Program. He graduated in May of 2013.

With his new degree, Apollo hopes to transition into a medical/surgical position in a critical care facility and already he is talking about continuing his education. Eventually, he says, he will pursue a bachelor’s degree in nursing.

He dreams of one day returning to his native Kenya and using his medical knowledge and skills in a teaching capacity.

“I am trying to find what I can do to help in Kenya with the knowledge I have acquired.”