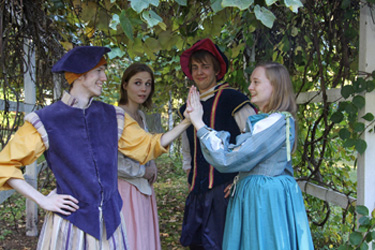 Matthew Lundergan of Raymond, NH, rear, Hannah Heckman-McKenna of Salem, NH, Paul Kelly of Derry, NH, and Samantha Wheatley of Lowell,will appear in Much Ado About Nothing.

Considered by many to be one of William Shakespeare’s best comedies, “Much Ado About Nothing” will be performed by Northern Essex Community College’s Top Notch Players beginning Friday, Nov. 1, in the Chester W. Hawrylciw Theater located in the Spurk Building on the Haverhill campus, 100 Elliott St.

“Much Ado About Nothing” is thought to have been written at the tail end of the 16th century as Shakespeare was approaching the middle of his career. It combines elements of robust hilarity with more serious meditations on honor, shame, and court politics. 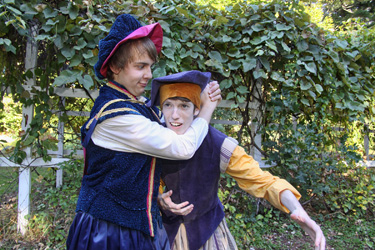 “It is a witty comedy that ends with multiple marriages and no deaths. It chronicles two pairs of lovers. Shakespeare develops their journey with a rich sense of humor and compassion,” according to Murphy.

The production will include nearly 30 NECC students. Many of them are enrolled in public speaking, acting, or Shakespeare literature courses.

“This play allows them to see and understand how accessible Shakespeare really is,” says Jim Murphy, NECC theater professor. “It is a comedy the audience can identify with. They can see themselves in the characters.” 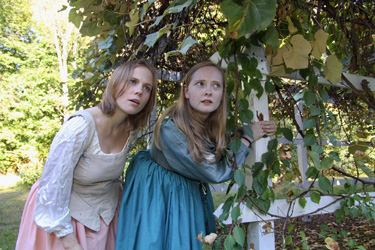 Hannah Heckman-McKenna of Salem, NH and Samantha Wheatley of Lowell

The set was designed by Susan Sanders, coordinator of theater, technical director of the Top Notch Players, as a suggestion of London theaters of Shakespeare’s day. The costumes are Elizabethan in spirit, if not exact replicas of clothes of the day. NECC student Thera May Driscoll built some of the costumes with assistance from the Top Notch Players.

For further information contact Susan Sanders at ssanders@necc.mass.edu or Jim Murphy at jmurphy@necc.mass.edu