NECC Employees Recognized in “40 Under 40” 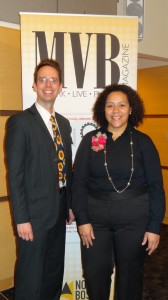 Two members of the Northern Essex Community College faculty and staff were recipients of Merrimack Valley Business Magazines “40 under 40” Awards at a luncheon held on the Haverhill Campus on Friday, October 18.

Michael Cross, 33, assistant professor of chemistry, and Analuz Garcia, 36, coordinator of student activities and engagement, both received the awards, which honor “young movers and shakers” in the Merrimack Valley of Massachusetts and Southern New Hampshire.  Each year hundreds of individuals who live and work in the region are nominated for this honor and a committee of journalists and community representatives select the top 40 to be honored. 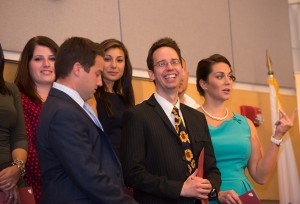 Cross was nominated by President Lane Glenn who called Cross “a gifted teacher who uses his talents to spread his passion for chemistry throughout the Merrimack Valley.”

In his nomination, Glenn credited Cross with making an often difficult subject “understandable and fun” by using games and magic tricks to communicate key concepts.

He also mentioned that Cross is one of the most popular speakers in the college’s Speakers Bureau and the founder of the college’s Bacon Board Gamers, a club for students who enjoy playing board games.

Professor Cross lives with his wife and three young children in Atkinson, NH.  He holds a Ph.D. in organic chemistry from the University of Utah where he specialized in oxidative lesions in DNA and RNA. 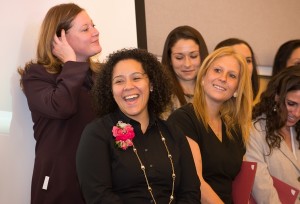 Calling Garcia “an advocate for student success”, Suarez-Shannon wrote “Analuz is a young woman who shares her sage-like wisdom with any and all who request it.”

Originally hired as a financial aid counselor at Northern Essex, Garcia found her passion was “helping students.”  As coordinator of student engagement and activities, she co-advises the NECC student senate, leads orientations for new students, plans student events, and offers guidance to students and faculty advisors to student clubs.

Her best career advice is to “Do what you love” and, according to her colleagues, it is obvious Garcia loves her work.

Married and the mother of 8-year old twins, Garcia was the first in her family to earn a college degree when she graduated from St. John’s University in Queens, NY in 1999.

Each year, MVB — a sister publication to The Eagle-Tribune, honors 40 people under 40 years of age for their outstanding contributions to the business and broader community. Last year’s winners were chosen from hundreds of nominees, and even more entries are expected this year.