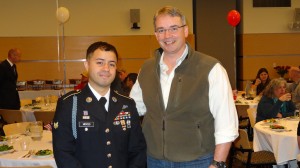 Northern Essex Community College recognized members of the NECC community who are veterans at a Veterans Appreciation Day luncheon on Wednesday, November 13.

Fifty Northern Essex students, faculty and staff attended the luncheon which was held in the Hartleb Technology Center on the Haverhill Campus.

Sponsored by Student Engagement and Veterans’ Services, the event featured three guest speakers: Phil Starks, who graduated from Northern Essex in 1991 and is now an associate professor of biology at Tufts University; Jaime Melendez, director of veterans’ services, Lawrence, MA; and Francisco Urena, a 2009 graduate of Northern Essex, who is the commissioner of veterans’ services for the city of Boston.

Jeff Williams, Northern Essex’s veteran’s services coordinator, opened the luncheon by reading a letter from Northern Essex President Lane Glenn who was unable to attend. Introducing himself as the son of a career Marine, who served two years of active duty in Vietnam, Glenn wrote “From those years living as a military son, I learned first-hand about honor, duty and discipline, and what it means to be part of this great country’s armed services…I am honored that you chose Northern Essex Community College as your institution of higher learning.”

An especially somber moment came when NECC student Justin Merced, who served in the US Army in Iraq and Afghanistan, pointed out the Fallen Comrades Table which was set up in the corner of the room with dinner service set for one and a single red rose in a vase. Filled with symbolism, the Fallen Comrade Table acknowledges those killed in action, prisoners of war, and those listed as missing in action. After explaining each part of the table, Merced said “let us remember and never forget.”

A 1985 graduate of Andover High School, Starks enrolled in NECC’s liberal arts program after serving a number of years in the military. His Northern Essex studies were interrupted by a call to duty in the Gulf War. While stationed in the Middle East, Starks learned he was accepted to Harvard. He went on to earn a Ph.D. from Cornell University and is now teaching and doing research in the field of behavioral ecology.

Starks said the military taught him “how to be a better organized person” and Northern Essex “provided an educational foundation.” “Harvard and Cornell would not have happened without first the service and then Northern Essex.” 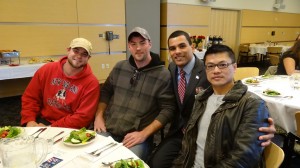 Francisco Urena also enrolled at Northern Essex after his military service, which included a tour as a tank commander in Iraq. He still carries shrapnel in his cheek from a vehicle explosion in Iraq, an injury for which he was awarded the Purple Heart.

Calling April 15, 2013, the day that “changed the city of Boston forever”, Urena described how he arranged to have two Marines, wounded warriors, visit the marathon victims, and share how they have coped with their own injuries.

Veterans with questions regarding educational benefits, funding resources, and prior credit and/or transfer opportunities, can contact Jeff Williams, NECC’s veterans’ services coordinator, at 978 556-3631 or jwilliams@necc.mass.edu.