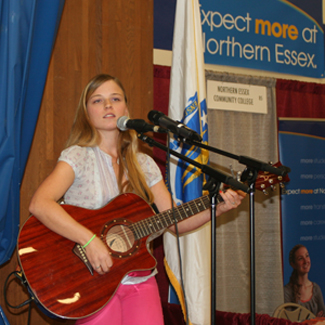 For Northern Essex alumna Liz Bills, singing and music were always her comfort. When she was 25 she decided to make it her career; a career that has taken her to the stage of American Idol, a televised reality-singing competition.

The 27-year-old Boston resident was raised in Haverhill and attended Haverhill schools graduating from Haverhill High School in 2004. Though she began playing the piano, writing music, and singing since she was eight and taught herself the guitar at 16, they were talents she was reluctant to share.

After high school she started taking classes on again, off again at Northern Essex, but it wasn’t until she was 25 that she started getting serious about her music. She completed liberal arts and music courses at NECC before transferring to Berklee College of Music in Boston.

Three years ago Bills wanted to add to her musical repertoire and formed a band. She turned to Craig’s List and found drummer Austin Ferrante and lead electric guitarist Jesse Cohen. The result, was a band they named Analog Heart. After some branding pains, settled as an alternative rock band with a pop influence. Today the band has its own website, filmed two videos, and just completed an East Coast tour with plans for an April upstate New York tour.

During her musical evolution, Bills says there was always American Idol. She auditioned a half dozen times, but never made it past the initial cut until this year. 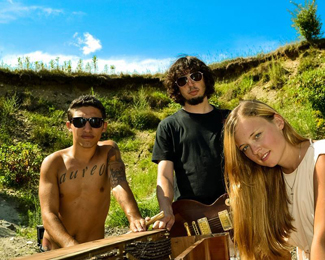 “I have the philosophy that in order to be successful you need to fail over, and over, and over again,” she says. “So I never gave up.”

“She went through several eliminations to make it to “Hollywood Week” where several hundred contestants compete against each other. Bills was one of the last 30 females to perform before she too was also eliminated.
An ingénue to inner workings of television, Bills says, “I was surprised at how American Idol is not so much about the music as it is about being a television show.”

She said she experienced long days followed by longer nights.

I was amazed at myself and how I was still standing and able to perform after the emotional and physical stress of going without sleep,” she says.

But still, she would encourage any aspiring singer to audition.

“It is great conditioning for this this lifestyle,” she says. “You have to know how to audition and face rejection. You learn you can’t take thing too personally.”

The petite blond, who says her voice is a little bit country with some rock in it, points to the influences of Janice Joplin and Grace Potter.

To learn more about Bills and her band visit the band’s website.