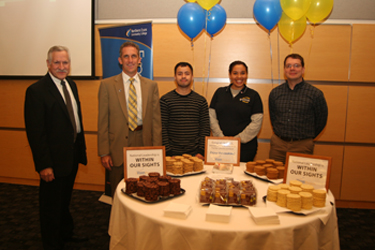 In the end, it wasn’t a photo finish that secured Northern Essex’s victory in the Department of Higher Education’s Twitter photo contest, it was a landslide with NECC tweeting the most photos of faculty, staff, and students holding “Within Our Sight” placards to draw attention to the state’s Vision Project.

The Vision Project is a state-wide initiative designed to produce the best-educated citizenry and workforce in the nation by improving higher education in the state.

The DHE challenged all Massachusetts community colleges, and four-year colleges and universities to take photographs of individuals around campus holding placards stating “National Leadership is Within Our Sights.” Each photo was assigned a point value depending on who was in the photograph. The schools were encouraged to share these photos on Twitter using a variety of hashtags. 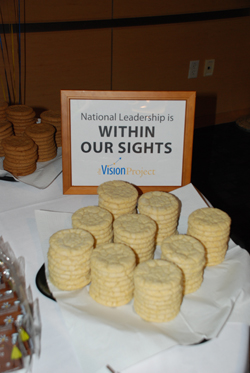 Cookies were provided by the Dancing Deer Baking Company

When the DHE launched the Twitter contest, to promote this year’s Vision Project conference and annual report, Northern Essex rose to the challenge engaging as many faculty, staff, and students in the contest as possible. In addition to being instrumental in getting the word out on Twitter Northern Essex also earned a cookie party featuring Massachusetts’s own Dancing Deer Baking Company’s all-natural gourmet cookies.

The NECC community, along with DHE assistant deputy of academic affairs Carlos Santiago, feasted on cookies, brownies, hot chocolate and milk Monday, November 18, in the Hartleb Technology Center.
Santiago, who has held this position for little more than seven months, says the Vision Project is what attracted him to work for the Massachusetts DHE.

“What is going on in Massachusetts is not going on around the country. I see 29 educational institutions working together for a common goal and a combined objective to create the best public higher education possible. I don’t see this happening anywhere else,” he says.

He praised the NECC community saying it is “uplifting to see the work you do”.

NECC President Lane Glenn congratulated the college community on its win and on helping to promote the Vision Project.

“The Vision Project is a wonderful program that is helping to close the gap in student success. Good things happen as the result of the Vision Project,” he said. “It is an ambitious effort to improve higher education in the state by encouraging college participation and completion, student learning, and workforce alignment.”

For more information on the Vision Project visit the website.