“A Christmas Carol,” is a Northern Essex Tradition 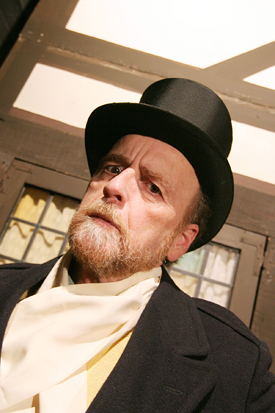 Theatre professor Jim Murphy will once again take on the role of Scrooge during NECC's annual production of "A Christmas Carol".

While some may think of Charles Dickens’s “A Christmas Carol” as a classic, at Northern Essex Community College it is a tradition.

What started as a department fundraiser for the college’s performing arts nearly 15 years ago has evolved into an annual, holiday affair that is shared with the entire community. The cast is comprised of an eclectic mix of NECC students, faculty, staff, as well as their family members.

Each year, it is performed in the 75-seat Chet Hawrylciw Theater on the third floor of the Spurk Building on the Haverhill campus, 100 Elliott St. This year is no different. Performances will be held Friday, December 13, at 7 p.m., Saturday, December 14, at 2 and 7 p.m. and Sunday, December 15, at 2 p.m. Tickets are $10 for general admission, $8 for students and senior citizens and $5 for children 6 and under. They can be purchased at the door or through www.mvarts.info.

The adaptation of the story written in 1844, is one that longtime NECC theater professors Jim Murphy and his wife Susan Sanders are very familiar with. For nearly all the 15 productions Murphy has acted and/or directed in the production while Sanders has overseen the set direction and costuming, as well as playing smart parts.
Murphy and Sanders, with precision time-management, can execute the production in just three weeks.

“What happens at the end of those three weeks, in the span of two hours, is a gift to the community,” Murphy says. “It is pure magic. The story is simply told and advanced with the assistance of four Madrigal singers in a very intimate space.”

Murphy, who has played the dialogue heavy role of Ebenezer Scrooge many times, acknowledges that the theatrical event has taken on a life of its own, attracting aspiring thespians from the classroom and the boardroom.

The production is family friendly, he notes. A family of four can attend the production for less than the cost of one ticket to a larger regional production of the same play, he says.

“It is a very intense three weeks followed by an intense weekend. The camaraderie that develops among the cast members is wonderful,” says Murphy. “The audience sees and feels that energy.”