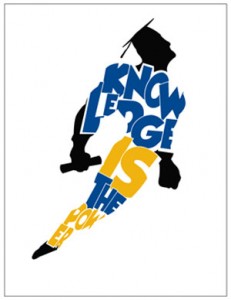 The winning Class of 2014 T-shirt design by Angel Augusto.

Angel Augusto thinks everyone needs a super hero – even Northern Essex grads. So, when he entered the Class of 2014 T-shirt design contest he created one. He won the contest as well as a new Dell tablet, stylus, and cushioned cover.

The t-shirts will be sold in the college’s bookstores and proceeds will benefit the Alumni Association Scholarship Fund.

The design depicts a graduate in gown and mortar board gripping a diploma with the words “Knowledge is the Power” creating the body.

The 28-year-old Lawrence resident will graduate in May with an Associate of Art degree in General Studies: Art. He emigrated from the Dominican Republic four years ago. Almost immediately he enrolled in ESL courses followed by college credit classes.

A lifelong artist, Augusto decided to pursue his dream of one day owning a successful graphic design company with offices in the United States and the Dominican Republic.

Augusto says he designed his graduate super hero because it best represents the community college student – all of whom are heroes. 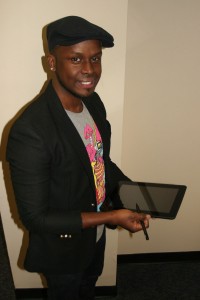 The design contest was open to all students, according to Lindsey Mayo, director of alumni relations. At least one faculty member built the contest into her curriculum. There were nine solid entries. A faculty and staff focus group named the top five contestants. Those five images were posted to Facebook and people were asked to vote for their favorite. The winning entry received more than 150 likes.