Trip to Grammys is Trip of a Lifetime 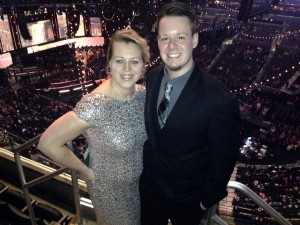 When Erin (Galvin) Columbare, a self-professed “Awards Show Junkie”, learned she won a trip to the 56th Annual Grammy Awards Show in Los Angeles, it was music to her ears.

The Derry, New Hampshire, resident recently won tickets to a concert through radio station Mix 104.1 and was told her name would be entered into a pool for tickets to the Grammy Awards. She jokingly asked her husband Mike if he could arrange to get his Saturday night work-shift covered and then never gave the Grammys another thought other than to plan on being in front of her television the night of the broadcast.

Erin, who is the administrative assistant to David Gingerella, NECC’s vice president of finance/ CFO, was driving down Rte. 495 when the three Mix DJs called to inform her that her name was selected from the nine entries. She got so flustered she had to pull over.

So, beginning on Saturday morning, the Columbares, who just got married in October, began a 42-hour whirlwind trip to the West Coast. Mix 104.1 paid for the airfare, hotel and tickets to the Grammys. First, the Columbares made a call to their wedding tuxedo supplier, Men’s Warehouse, who arranged for a tuxedo in Mike’s size to be waiting in Los Angeles. Then a relative emailed Erin a photo of a dress from RentTheRunway.com where you can rent red-carpet ready dresses and gowns. 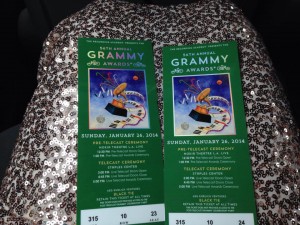 Tickets to the Grammys that Erin won through a Mix 104.1 radio contest.

An early Saturday morning flight took them to California where neither of them had ever visited. After renting a car, they did a little sightseeing including visiting Dodgers Stadium and lunching at In-N-Out Burger (Mike’s idea), and Universal Studio’s Hollywood City Walk.

After a good night’s sleep, with the help of their smart phones, they located a salon featuring a Grammy Awards special where Erin had her makeup and hair professionally done.

While they didn’t get to walk the “red carpet” like the Grammy luminaries, Erin says they sat in the balcony section of the Staples Center where they did see some lesser known American Idol contestants. In their seats by 4:45 p.m. the show began at 5 p.m.

All the performances, she says, were spectacular. One highlight, she says, which was not broadcast, was Paul McCartney and Ringo Starr singing Happy Birthday to one of the show’s producers.

“It was such fun,” she says. “It was a once in a lifetime trip. We took in everything we could and enjoyed every minute. We knew it would never happen again.”