MA Secretary of Education Likes What He Sees in Lawrence 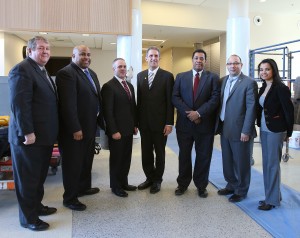 Glenn opened the meeting by sharing a slide presentation highlighting the college’s history in the city, including its recent expansion.

The college first began offering classes in Lawrence over 40 years ago, and in 1991—thanks to a gift from the Prudential Insurance Company—the college opened its first campus in Lawrence, the Dimitry Building at 45 Franklin St. Since that time, the college’s presence in Lawrence has grown to include the Louise Haffner Fournier Education Center, 78 Amesbury St; NECC Riverwalk, 360 Merrimack St.; and the iHealth Building, 52 Franklin St. Some of the college’s premiere programs including its 20-plus health certificates and associate degrees and its criminal justice and paralegal programs are headquartered in Lawrence.

This month, the college opened the newly renovated 420 Common Street, which will house a branch of Eastern Bank, a café, and a bookstore on the first floor, and classrooms on the second and third floors, including space for a four-year college partner. “We envision the first floor as space that will be used by the community, not just our faculty, staff, and students,” said Glenn.

In January, the college also opened its new jewel in the city: the Dr. Ibrahim El Hefni Health & Technology Center, a newly constructed 44,000 square-foot facility. The Health & Technology Center features a Health Education Simulation Center, where health care students will receive hands-on experience in simulated environments such as a hospital intensive care unit, a trauma room, an acute care hospital room, an apartment, an ambulance, and a doctor’s office. The building will also include classrooms and computer labs and a Career Planning and Advising Center where students will receive academic and career counseling. The building is open for classes Jan. 22 but the Career Planning and Advising Center will open later in the semester. “The college is focused on preparing local residents for jobs,” said Glenn. “We also want to play a role in revitalizing the downtown.”

Calling NECC’s plans for Lawrence “strategic and visionary,” Secretary Malone commended the college’s focus on preparing local residents for jobs in high-demand fields such as health care, manufacturing, and life sciences. “There’s been a big need in these areas.”

He also shared his concerns which include preparing veterans and other adult for new careers, addressing the need for Adult Basic Education (ABE) courses, and sharing health career pathways with high school students.

Malone praised the college for working with private and government partners to plan and fund expansion in the city. “We know we get results when we invest in education. The public/private partnerships are so important.”

Lawrence Mayor Dan Rivera, a member of Northern Essex’s Board of Trustees, enthusiastically supports the college’s expansion in the city. “The college’s investment energizes other property owners. It’s definitely a spark for us.”

The meeting was held at 420 Common Street in a third floor conference room with two walls of windows overlooking the city. Following the presentation, Secretary Malone, President Glenn, and Mayor Rivera visited the lobby of the El Hefni Health & Technology Building.