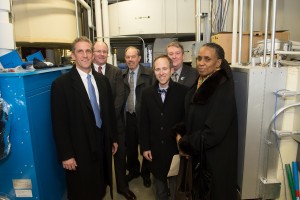 The $6.2 million energy project, completed on both the Haverhill and Lawrence campuses, is expected to yield a 28 percent reduction in greenhouse gas (GHG) emissions and a 33 percent reduction in energy costs, lowering energy bills by hundreds of thousands of dollars annually.

This project was funded by a state bond that Northern Essex will pay back with the help of energy cost savings.  The project received additional support from Division of Capital Asset Management and Maintenance, the college, and National Grid.

“Being environmentally aware is a priority for Northern Essex, which is why we’re so pleased with the results of this project,” said Lane Glenn, president of Northern Essex.

“Under Governor Patrick’s leadership we have made tremendous progress on all of our energy goals,” said Commissioner Sylvia. “From national leadership in energy efficiency to consecutive annual double digit clean energy job growth, our strategy is working. We are leading by example and making our state sites more efficient than ever, reducing emissions and cutting costs.”

“The Division of Capital Asset Management and Maintenance (DCAMM) is proud to partner with the Department of Energy Resources to help lead the Patrick Administration’s commitment to improve the efficiency of our state facilities,” said DCAMM Commissioner Carole Cornelison. “In meeting our obligation to improve our state buildings, we will continue to provide innovative energy modifications to our facilities that will significantly reduce the Commonwealth’s energy consumption and carbon footprint.”

The NECC campus project is the first large scale project to be completed and certified under the AEP, with energy, emission, and/or significant cost reductions of at least 25 percent. The AEP is jointly led by DOER and DCAMM, was launched in December 2012 and aims to undertake energy efficiency projects at 700 state sites in 700 days.

“Each year the legislature works very hard to commit funding to support these important energy programs that are aimed at reducing energy costs and emissions, and ensuring that the Commonwealth continues to be a national leader in energy efficiency,” said Representative Brian S. Dempsey. “I am thrilled that NECC will be the first major AEP project to be completed in the State.”

Other sustainability initiatives at Northern Essex include single stream recycling on both campuses, solar lighting for shuttle shelters on the Haverhill Campus, holiday shutdowns to save energy costs, and purchasing energy from solar farms through the PPA’s or power purchase agreements.