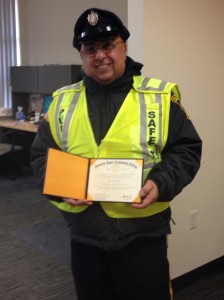 For 42 years, Eagle Security guard Edward Gabriel, who patrols Northern Essex Community College’s Haverhill campus, wasn’t quite sure he had ever actually graduated from NECC.

That question was laid to rest last week when Grace Young, Dean of Academic Support Services, Articulation, and Transfer, presented him with his diploma.

Gabriel, 62, was fresh out of Central Catholic High School when he enrolled in the liberal arts program in 1971. His first classes were held in the current Haverhill City Hall, which at one time served as Haverhill High School.

“Back then, everyone knew everyone on campus,” he says.

He completed his studies, but not before meeting fellow student Debra Allen who would eventually become his wife. He joined the Army Reserves and she transferred to Fitchburg State College.

Throughout high school, college, and post-college, Gabriel worked as a clerk at Conlin’s Pharmacy in Methuen. He saved his money and in 1974 thought he might buy a modest cottage at Salisbury Beach. He bought a Salisbury donut shop instead. Four years later he moved Gabe’s Donut and Family Restaurant to Lawrence. It eventually grew to include two locations and employed 27 people including his parents.

“The business was very good to me and my family for 36 years,” Gabriel says, “but then it was time to sell.”

After nearly four decades of waking at 4 a.m., the Salem, NH, resident traded his apron for a security guard uniform. Trained by Eagle Security, he still uses his people skills to work with the staff, faculty, and students at the college.

Though Gabriel was a member of the first class to graduate from the Elliot Street campus, he had joined the Army Reserves and never participated in a ceremony. So, for years he wondered if he ever satisfied the requirements to earn a diploma. Recently, after a brief exchange detailing his concerns with Dean Young, she looked up his college transcript and presented him with his diploma.

“This was a great place for me to start,” he says. “It was a real stepping stone for me.”