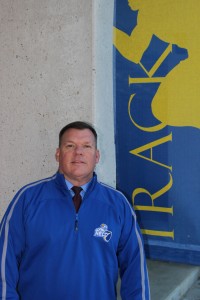 Back in the late 70s, when Haverhill High School track standout Rick Brown left for college, he was certain Haverhill was in his rearview mirror. Fast forward 38 years, the retired Massachusetts state police sergeant has moved back to Haverhill and has been appointed track and field coach at Northern Essex Community College where he is charged with building the program.

A seasoned coach who has had success building programs at both Bishop Feehan High School in Attleboro as well as Bryant University in Rhode Island, he hopes to continue that success at NECC. He is currently recruiting students for the program.

The 56-year-old isn’t just looking for track and field stars, he says. He is looking for athletes who carry with them a large dose of self-motivation.

“Every kid I have ever coached has improved,” he says. “They may not come in first, but as long as they are improving means they are working hard.”

Brown, who continues to compete in track and field events at the master’s level, holds the title for Eastern shot put champion for the 55-59 year-old age group.

What does he enjoy about track and field?

Brown can trace his own self-motivation back to when he was running track for Bradford’s Caleb Hunking School track team and won the city middle school championship and later for Haverhill High School where he was captain of the track and field team and was a top hurdler in both the state and New England.

Those accomplishments earned him a spot on the Fitchburg State College track team where he went on to become an All State, All New England, and All American athlete in track and field. He still holds the school record in the decathlon. In 1982 he was signed by the New England Patriots as a free agent wide receiver.

Brown joined the Massachusetts State Police and settled in Attleboro where he raised his two daughters and his wife developed a following as an aesthetician. Brown never thought he would return to Haverhill, but that all changed when his grandson arrived. His daughter, son-in-law and grandson settled in Georgetown and Brown and his wife Kendra bought a home in Rocks Village.

Today, Brown is the assistant director of public safety at Wentworth Institute of Technology in Boston. Kendra is exploring relocating her business, Kentrina’s Aesthetic, to Haverhill.

As a coach, Brown says he is all about positive reinforcement.

“When it comes to my athletes I am always positive…never negative,” he says. “All I ask of them is to give me two quality workouts a week. The other two days they can cross train and work on fundamentals and technique. This approach hasn’t failed me yet.”

Students interested in participating in NECC’s track and field program should contact Rick Brown at rbrown1@necc.mass.edu for more information on the program visit the NECC track and field website.