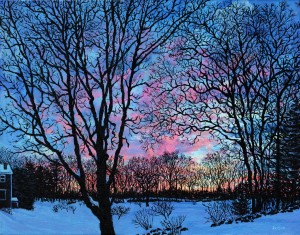 Artist Mark Reusch, who is caretaker of John Greenleaf Whittier’s Birthplace in Haverhill will present a painting and photography exhibit featuring the 326-year-old property of the famed writer and abolitionist through April 5 in Northern Essex Community College’s Bentley Library ArtSpace on the Haverhill campus, 100 Elliott St..

Reusch, who is a freelance illustrator and instructor at the Massachusetts College of Art & Design, has lived at the birthplace of the famed poet on Whittier Road in Haverhill since 2011.

The exhibit will feature photographs as well as illustrations of the property and its various buildings.

As a student at Massachusetts College of Art & Design in the early 90s, Reusch discovered the book, “Two Worlds of Andrew Wyeth: Kuerners and Olsons,” a museum catalog of landscapes by painter Andrew Wyeth focusing on two different neighbors’ rural property. He was inspired, at the time, to someday create a body of work focusing on his surroundings if he were ever fortunate enough to live someplace similar.

“In 2011 I moved to the Whittier Birthplace as caretaker after living in the Boston and Providence areas for roughly 20 years, and realized this was my opportunity to finally start painting landscapes of what I saw each day. These paintings were much different in style from the Halloween-themed art, concert posters, editorial illustrations, snowboard designs, and other work I’d done up to that point,” he says. 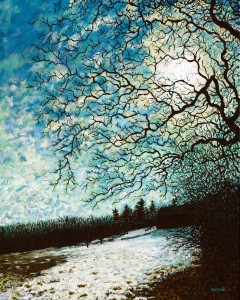 “With this new body of work focusing on Whittier’s Birthplace, I am taking advantage of my unique position of being a painter as well as a year-round caretaker of this beautiful and historic landmark. Living in the Whittier family’s 326-year old farmhouse, set on 69 acres of open fields and deep woods, and witnessing the foliage and wildlife throughout the four seasons has been a daily source of inspiration since I moved here in 2011. And as an artist who almost always preferred working from imagination rather than from any kind of observation, these paintings have been a new direction for me,” Reusch says.

“Living in such an idyllic setting that’s remained largely unchanged for over three centuries has had a pronounced effect on my way of thinking and artistic goals, especially after having lived in the Boston and Providence areas for 20 years. I work primarily from home as a freelance illustrator, and spend time outdoors each day and night, walking the fields and woods with my dogs, observing and appreciating the natural world around me. These new paintings and photographs are a record of what I see each day.”

A graduate of Haverhill High School, Reusch earned a Bachelor of Fine Arts degree in Illustration from Massachusetts College of Art & Design in Boston.  He earned the 2013 Best of New England Design Award for “Unbored, The Essential Field Guide to Serious Fun,” a children’s book.

Last year he was selected to participate in group exhibits at the FOE Gallery in Northhampton, MA. He previously exhibited at Space 242 in Boston, Fool’s Mansion in Salem, MA, and the Aurora Gallery in Worcester.

This exhibit is sponsored by the NECC Art & Design Department. For additional information contact pkidney@necc.mass.edu or Marc Mannheimer at mmannheimer@necc.mass.edu

NECC offers an associate degree in general studies: art which provides a two-year degree with a focus on specific area of the arts, such as fine arts, multi-media, photography, or visual communications.

For additional information on the artist, visit his blog.