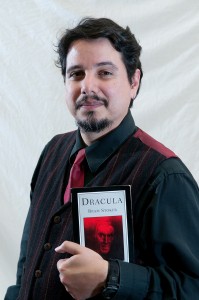 After submitting stories to the publication regularly for 30 years, the magazine accepted and published his science-fiction, short story “Another Man’s Treasure,” in the May 2014 issue. Analog Science Fiction and Fact Magazine is the longest, continuously published science fiction magazine in the country, and is considered one of the most influential in the field. It is one of only a handful of speculative fiction digests that still publishes print editions, with a circulation of about 27,000.

“When I got the acceptance in my email, I read it about 50 times to make sure it wasn’t a rejection, then I went out in my back yard (it was summer) and lay on the grass staring at the sky for about two hours,” he says. “Then, I went back to my desk and picked up where I’d left off with the next story.”

“Another Man’s Treasure” is a science fiction story set in a dystopian America of the near future. The story is about Maggie Moreno, a widow and single mother who scratches out a living as a prospector in an abandoned 20th century mega-landfill. When the local thugs pressure her to risk her life to bring in better salvage, she’s forced to resort to desperate measures to save herself and her children. 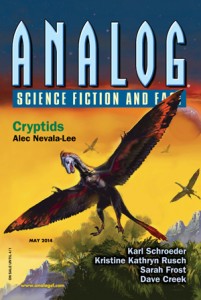 “After working, mostly unsuccessfully, at writing science fiction for a little over 30 years (and earning a graduate degree in fiction writing along the way), this publication feels good. It’s nice to get a dose of validation from the editors of a magazine that you’ve admired since before you could legally drive or buy cigarettes. But mostly I’m thinking about how I can make the story that I’m working on now even better.”

Analog Science Fiction and Fact Magazine was initially published in 1930 in the United States as “Astounding Stories” as a pulp magazine, it has undergone several name changes. It is in the library of the International Space Station. Spanning three incarnations since 1930, this is perhaps the most influential magazine in the history of the genre. It remains a fixture of the genre today.

Dr. Greene, who received his Master of Fine Arts in Creative Writing and his doctorate in English from the University of Massachusetts at Amherst, specializes in Victorian Literature and Cultural Studies. A Salem resident, Greene also works part time as a ghost tour guide.