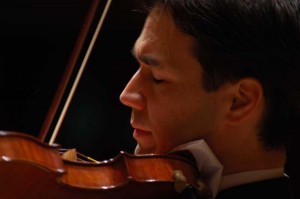 ECMP’s artistic director and flutist Michael Finegold of Andover and guest cellist Priscilla Bellairs of Newburyport, professor emerita of English at NECC, will join Taylor and Pihl for the Quantz. The music is of the Romantic and Baroque periods with a contemporary element.

“‘The Brahms Sonata for Piano & Violin in A Major’ is the major work featuring the violin and piano equally rather than the traditional single instrument,” says Finegold. “The beautiful, mystical and emotionally wrenching contemporary music of Arvo Pärt, though less familiar to the general public, is a must to hear and will win you over. Pärt’s works are influenced by Gregorian chant, and his Fratres is a virtuosic violin gem.”

The Essex Chamber Music Players, under the artistic direction of Michael G. Finegold has been in residence at NECC since 1999.  The Essex Chamber Music Players (ECMP) is devoted to the creation and presentation of new classical music along with great musical treasures of the past. Its motto is Music for the Twenty-first Century: Treasures of the Past, New Music Premieres. ECMP, is a non-profit 501 (C) (3) organization.