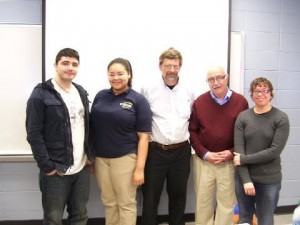 A genocide forgotten is a genocide waiting to repeat itself. That was the message brought forth during a panel discussion March 12 hosted by the Contemporary Affairs Club at Northern Essex Community College.

The event followed a classroom presentation the week before on the Armenian Genocide which will commemorate its centennial next year in 2015.

Titled “Genocide in Our Time,” the panel focused upon three beleaguered nations: Armenia, Rwanda and the Jewish holocausts. The event garnered much exposure on campus, thanks to the efforts of Professor Stephen Russell, who coordinated the event with Club President Nik Arboleda.

“In order to maintain world peace and harmony, nations much respect each other’s differences and show tolerance,” said Sanchez, president, Student Senate. “Some 800,000 victims were put to death during the conflict two decades ago. Internal strife still remains in that country. The super powers ignored it then and continue to show apathy toward it now.”

Dr. Helman presented a visual account of the Holocaust, covering dehumanization and isolation, kristallnacht (night of broken glass), forced labor and the Final Solution. “Genocide occurs when people are made to feel different, inhuman and deprived,”she pointed out. “We must make ourselves aware of violence throughout the world and strive toward resolve and understanding. We need to remain vigilant.”

Vartabedian pointed to denial, both by the Turkish government and the United States, in recognizing the Armenian Genocide since 1915 when 1.5 million victims were put to death and another million scattered from their homeland.

Vartabedian drew from his own family accounts of genocide survivors, including his mother, who was the last to perish in Haverhill.

“A number of immigrants fled the turmoil and settled in this community, working the shoe shops and creating an independent lifestyle,” he pointed out. “Haverhill became a city full of refugees who helped shape this city into one of prosperity.”