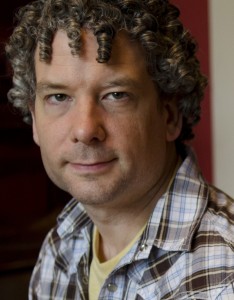 Noted comics writer and editor Scott Allie will appear at Northern Essex Community College on Tuesday, March 25th, from 6:30 to 8:30 p.m. in the David Hartleb Technology Center on the Haverhill campus, 100 Elliott St. This event is free and open to the public.

Allie will discuss the day-to-day responsibilities of being an editor for the third largest comic book publisher. “I will start with my self-designed independent concentration on comics at Bradford College under Marc Mannheimer, through to my role as editor-in-chief at “Dark Horse Comics,” he says. This will include the step-by-step process of collaborating on a comic from pitch to final lettered colors,” says

Currently editor-in-chief of “Dark Horse Comics” where he has worked since 1994, Allie will be in residence at NECC through March 27 funded by a grant from the NECC Foundation and sponsored by the Art and Design Department.

He will speak to the students in the “Art and Literature of the Graphic Novel” Learning Community taught by NECC professors Ginger Hurajt and Marc Mannheimer, who taught Allie back in the 1990s at Bradford College.

He is long-time editor of writers Mike Mignola, Joss Whedon, and co-writes the ongoing “Abe Sapien” series with Mignola, who created the character. Allie grew up in Ipswich and currently lives in Portland, Oregon.

The second half of the presentation will focus on a very specific approach to telling a story in comics, focusing on examples from the wide world of “Hellboy” comics by Mike Mignola and his collaborators.

NECC offers an associate degree in General Studies: Art which allows students to focus on a specific area of the arts, such as fine arts, multi-media, photography, or visual communications, while providing the flexibility to explore and experience the breadth of the arts. Students looking to transfer into a bachelor’s degree program, graduate from NECC with the
foundation needed to be successful.