Northern Essex Community College’s Top Notch Players will present Alan Ayckbourn’s farce, “How the Other Half Loves,” directed by Brianne Beatrice, in the Chester W. Hawrylciw Theater on the third floor of the Spurk Building on Fridays and Saturdays, March 28, and 29 and April 4 and 5 at 7:30 p.m., Thursday, April 3, at 4 p.m. and Sunday, April 6, at 3 p.m.

Written in 1969, “How the Other Half Loves” features a composite set of two over-laid living rooms. It follows the misunderstandings caused by a couple having an affair and covering their tracks using an innocent third party.

Tickets are available at the door or through www.mvarts.info .Tickets are $10 for general admission and $8 for students and seniors.

Coty Markee in charge of sound. 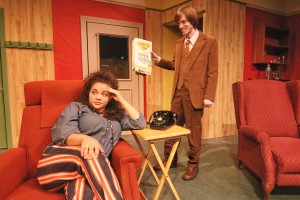 Kiara Pichardo of Lawrence and Matthew Lundergan of Raymond, NH

Will MacDonald as William Detweiler

NECC offers an associate degree in liberal arts: theater option which provides students with the opportunity to take courses in acting, directing, improvisation, children’s theater or earn credits for working on college productions in stage management and technical theater.