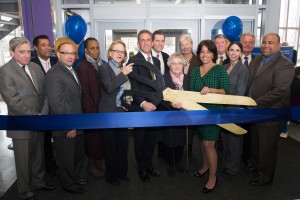 The 300 people who attended the March 21 ribbon cutting for Northern Essex Community College’s Dr. Ibrahim El-Hefni Allied Health & Technology Center in Lawrence were most impressed with the ambulance which is embedded in the first floor of the building.

The building was constructed around the ambulance—donated by TrinityEMS— which is being used to train students in the college’s paramedic technology programs.

While the ambulance has a “Wow” factor, the rest of the space also elicited admiration from the crowd.

The 44,000 square foot facility features a Health Education Simulation Center, where health care students receive hands-on experience in simulated environments such as a hospital intensive care unit, a trauma room, an acute care hospital room, an apartment, and a doctor’s office in addition to the ambulance. The building also includes classrooms and computer labs and a Career Planning and Advising Center where students receive academic and career counseling.

“An important part of the college’s mission is providing local residents with the skills and credentials that will lead to jobs, and that is just what this new facility is helping us to do,” said Lane A. Glenn, president of Northern Essex. 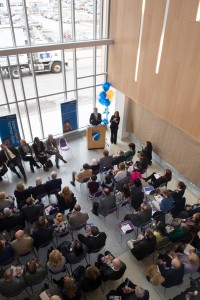 NECC President Lane Glenn addresses the crowd prior to the ribbon cutting.

Last year, 381 students received certificates and associate degrees from Northern Essex in health-related fields and 93 percent of those graduates are employed in their field a year after graduation, according to Glenn.

The building is named in memory of Dr. Ibrahim El-Hefni, a native of Egypt who was a longtime resident of North Andover and a successful business owner.  An electrical engineer, he began his business in the basement of his home, and for 30 years provided jobs for hundreds of people.  Before his death he created a foundation, now carried on by his widow Wensley El-Hefni, which has provided significant support to the college, including a $1 million donation to provide equipment for the new building.

Rivera said “This is not just a ribbon cutting.  It’s the rebirth of a section of our city that’s been neglected for a long time.  It will uplift our downtown, creating jobs and revitalizing the economy.” 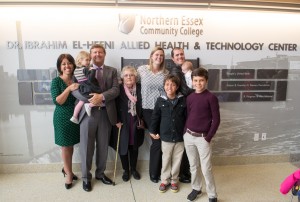 The El-Hefni family standing in front of the wall honoring Dr. Ibrahim El-Hefni.

The community is invited to tour the El-Hefni Allied Health & Technology Center at an Open House on Saturday, April 5 from 10 a.m. to noon.  For more information contact, Enrollment Services at 978 556-3700 or admissions@necc.mass.edu.