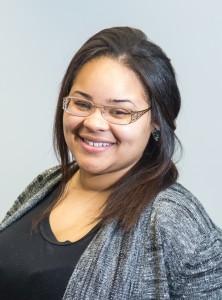 Northern Essex Community College Student Nairoby Sanchez of Haverhill will be honored by Governor Deval Patrick at the State House in Boston on Thursday, May 8 as an outstanding graduate of the class of 2014.

A 2012 graduate of Haverhill High School, Sanchez is a Liberal Arts: Political Science major at Northern Essex with a 3.7 GPA.

After arriving at Northern Essex in the fall of 2012, Sanchez quickly distinguished herself as a campus leader.

In her first year, she was vice president of the Student Senate (she’s now president), president of the college’s chapter of Amnesty International, and an active member of the Contemporary Affairs Club.

She also participated in the college’s Student Leadership Program, is a student ambassador, and will graduate from the Honors Experience, a rigorous honors program that’s affiliated with the Commonwealth Honors Program.

As a student leader, Sanchez has organized a textbook lending library to make textbooks more affordable for students. Last year she initiated a spring break community service trip, in which students helped residents of New York who had been devastated by Hurricane Sandy with clean-up.

Sanchez was nominated for the “29 Who Shine Award” by two of her professors: Dr. Steven Russell and Dr. Ligia Domenech, both of the Department of Global Studies.

As Steve Russell wrote, “Nairoby is intensely interested in problems related to human rights and she sees herself as someone who can help address human rights problems in the future.” As an example, Professor Russell sited a presentation on the Rwandan genocide which Sanchez has delivered twice to groups of students and faculty and staff. Calling her the best of a series of presenters, Professor Russell, writes “her presentation caused me and others on the panel and in the audience to think of the Rwandan genocide in a new light.”

After graduating from Northern Essex in May, she plans to transfer to a four-year college and ultimately attend law school. Her goal is to combine her love of government with her interest in international affairs and become a United States diplomat. She speaks Spanish and French in addition to English and would like to learn additional languages—possibly Russian—while pursuing her education.

In May 2011, the Massachusetts Department of Higher Education launched “29 Who Shine,” a program to recognize outstanding students representing each of the 29 public campuses. The honorees, chosen because of their academic achievements and record of student leadership and community service, stand poised to contribute greatly to the civic life and economic well-being of the state. Whether furthering their education or entering careers here in Massachusetts in fields as diverse as education, public policy, medicine, creative arts, and engineering, they truly embody the vibrant future that we all envision for the Commonwealth.