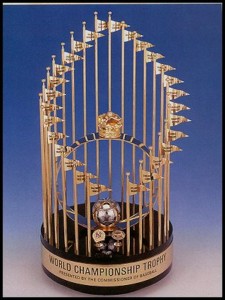 The Boston Red Sox 2013 World Series trophy will be on display in the lobby of the Spurk Building on Northern Essex Community College’s Haverhill Campus on Tuesday, May 13 from 3 to 5 p.m.

Northern Essex students, faculty, and staff are invited to attend this private viewing for the college community, and have their photo taken with the trophy.

Northern Essex was selected for this honor when the Red Sox organization contacted State Senator Kathleen O’Connor Ives, looking for a location in Haverhill to show the trophy.  The Senator recommended Northern Essex, which has a baseball team that’s ranked 4th in the nation and, as of this spring, a new softball team.

“We’re all very excited about this opportunity,” said Sue MacAvoy, the college’s athletic director. “The Annual Awards Convocation will be held later that evening at 6 p.m. in the Sport and Fitness Center.