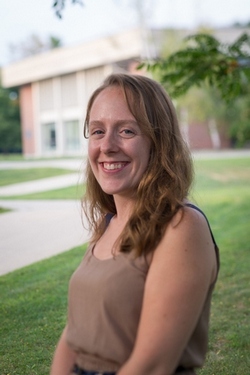 Marie Phillips of Haverhill has been selected as the student speaker for Northern Essex Community College’s May 17 Commencement.

Phillips, a single mom who decided to return to school, will graduate with high honors and an associate degree in Early Childhood Education.

Though she graduated from Haverhill High School in 1998 and enrolled at NECC, life events, including the birth of her daughter and marriage, interrupted her education.

Over a decade later, Phillips found herself a single mother raising her special needs daughter alone, delivering newspapers to pay the bills. During a bad winter storm in 2011, putting her and her daughter’s safety at risk being on the roads to deliver newspapers, Phillips says she had her “epiphany moment and decided that I would find a way to get back to school at NECC.”

Using the money she had been saving up to fix the brakes on her car, Phillips signed up for her first class back at NECC in the summer of 2011. “I used every cent I had to pay for enrollment into the class and for the textbooks required. I took a chance on myself that summer,” Phillips said.

Phillips’ chance more than worked out for her.  During her time at NECC, she has been involved in numerous activities on campus as well as in the community. On campus, Phillips is part of the Pathways to Academic & Career Excellence (PACE) program, a federally funded student support program; a presidential student ambassador, president of NECC’s Phi Theta Honor Society, a member of the Early Childhood Education Club, and a new student orientation leader.

Phillips is also very involved in the community. She has volunteered at Emmaus House in Haverhill, providing tutoring and arts and craft activities for the children there. She also works with the JumpStart program as a JumpStart Corps team leader working with local schoolchildren to strengthen their language and reading skills.

According to Gail Feigenbaum, Early Childhood Education program coordinator, “Marie exemplifies the many qualities of a successful student who can serve as a role model and highlight the accomplishments that are possible through the community college experience.”

Phillips will be attending Salem State University in the fall as an Early Childhood Education major. Phillips hopes to one day be a kindergarten teacher and possibly return to teach at NECC at a later point.

Upon learning she had been selected as commencement speaker, Phillips said, “Three years ago my first class at NECC fell on my daughter’s birthday; this year’s graduation also falls on her birthday. It is such a huge honor to have been chosen as this year’s student speaker at the NECC Commencement Ceremony. I’ve been smiling nonstop since I received the news that I was chosen.”

Over 1,000 graduates will receive certificates and associate degrees at the college’s 52nd Annual Commencement, which will be help on Saturday, May 17 at 11 a.m. on Northern Essex’s Haverhill Campus.

Daniel Rivera, Lawrence Mayor, will be the featured speaker.