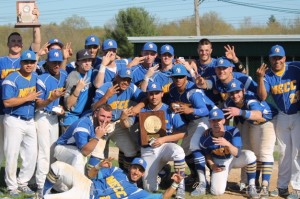 Massasoit captured game one, 12-5, to force the deciding game, which the Knights won by a score of 8-2 to send NECC (20-12) to the NJCAA World Series for the third straight season.

“It was a long tough day. It was a battle. Both teams were great. Massasoit showed why they were the No. 1 team. In the first game there was nothing we could do, they just beat us,” Northern Essex head coach Jeff Mejia said. “It was a battle between two really, really good teams and it was just a pleasure to be a part of that. As a coach, I feel honored to coach these guys. We have a great group of hard working kids.”

After Massasoit put up 12 runs in game one, the top-seeded Warriors had a difficult time all day with Bonito. The southpaw was outstanding on the bump for the Knights, going the distance surrendering just three hits and yielding two unearned runs. Bonito struck out seven and worked around six walks and one hit by pitch.

In fact, Bonito walked the bases loaded on two occasions — in the second and ninth innings — but he escaped both threats unscathed.

“We say that a lot about Danny, that is is effectively wild,” Mejia said. “But then he gets in a groove and he is tough to hit. He was heavily recruited out of high school as a pitcher, but I also liked his swing. When he came here (after transferring from Western New England College), I told him you’ll have a chance to swing and pitch and he told me ‘just let me know when I need to win the big one’. He stopped a three-game losing streak for us earlier in the year and today was obviously his biggest game of the season for us.”

Bonito did not allow a hit until two outs in the fourth on a double by Matt Levasseur. The only other hits Massasoit could muster came on an infield single in the fifth and two-out single in the eighth.

“I honestly just tried to stay calm,” Bonito said. “I’m one of the oldest guys on the team. I’ve been there (in pressure situations) before. I just concentrated on throwing strikes and getting my outs and having my fielders help me out.”

Massasoit starter David Tarr and Bonito matched zeroes until the top of the fifth, when the Warriors scored two unearned runs.

However, NECC bounced right back in the bottom of the frame when leadoff hitter Jonathan De La Cruz (Haverhill) connected for a two-homer homer to knot the score at 2-2.

Bonito settled down after the fifth. The sophomore retired the side in order in the sixth and seventh frames as part sending down 10 straight Warrior batters from the fifth through the eighth innings.

In the sixth, the Knights put up a three-spot thanks to a two-run triple by Michael Crisostome (Lynn) and RBI single from David Quazada (Lawrence) to take the lead for good.

Leading 5-2 in the last of the eighth, NECC added some insurance, as MacDaniel Singleton (Everett) cashed in with a bases clearing double to round out the scoring on the day, 8-2 in favor of the Knights.

“It is obviously a great feeling to go to the World Series and I’m really excited to go with this group of guys,” Bonito said. “That is a good Massasoit team and it was nice to finally beat them.”

The Warriors had defeated the Knights four consecutive times this season, before they claimed the most important one, sending NECC to the NJCAA World Series for the third straight season.