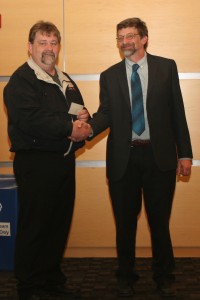 Augustonovich, a high honors student, graduates in May.

He was nominated for the scholarship by NECC Human Services Professor Diana Mele, who wrote, “Having professionally worked in the field for more than thirty years, I have had the opportunity to supervise, instruct, and mentor many students and practitioners in a variety of academic and clinical venues.  I believe Bruce is an exceptional student who stands out among the crowd.”

While enrolled at NECC, Augustonovich earned dean’s list status for four consecutive semesters. In addition, he was a supplemental instruction leader for one of the core Human Service classes on campus. He was a member of Psi-Beta, the National Honor Society in Psychology for junior and community colleges, and a recipient of the Northern Essex Writing Award. He recently received the Excellence Award in Human Services, which means he had the highest GPA in the program – a designation he shared with another Human Services graduate.

“I have known Bruce throughout his tenure here at Northern Essex as he has been enrolled in the Human Service Program in which I am a faculty member of.  During this time, I have consistently witnessed his numerous strengths and abilities.  He is a responsible, reliable, hard-working man who has shown considerable insightful and dedication to his work.  He consistently interfaces with classmates and other faculty alike in an exemplary manner and has had considerable success with regard to his academic achievements as evidenced by his impressive GPA,” wrote Mele.

The award for $1000 was presented to Augustonovich last month.

He will transfer to Lesley University in the fall.