Lawrence Mayor Daniel Rivera says he thought long and hard over what words of wisdom to impart on the nearly 1200 graduates of Northern Essex Community College during its 52nd commencement ceremony on Saturday, May 17. In the end, he told them to celebrate and get back to work. 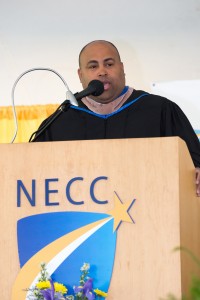 Rivera was introduced to the audience by his friend and fellow politician Andover Senator Barry R. Finegold who said Rivera is leading Lawrence into the future and will “restore the city to its former glory”.

“Today, come up here, walk across this stage, get your diploma and celebrate this accomplishment,” Rivera said. “Enjoy yourself tonight, tomorrow night, and next week…enjoy the love and admiration of your family and friends. Hug your mom and dad or your best friend or your partner…Celebrate because you deserve it. You have earned it. Then after tonight, after this weekend, after next week…once it is over…take a deep breath and get back to work. Get back to work going after your next set of hopes and dreams,” he told the NECC graduates and their families and friends seated under a white tent on the quad on the Haverhill campus under sunny skies. “Use this achievement to achieve something else…something more.”

He drew parallels between his own life’s journey and the graduates’ journeys. As a child of an immigrant, as a veteran, a homeowner, a husband, and a college graduate, he said, he is like the graduates. 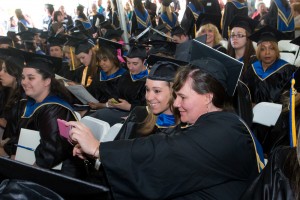 that came from the projects, an Hispanic boy from Lawrence who grew up in bad economic times who wasn’t even supposed to graduate from high school…but like the oldest graduate here today who is 73 years old and the youngest who is 17, we are here and have accomplished what many thought for us could not be done.”

He told them to continue to take on challenges large and small.

“Look for some other thing no one expects you to do. Get another degree, apply for a bigger job, start a business…and use this experience to remember how far you have come and how strong you are.” 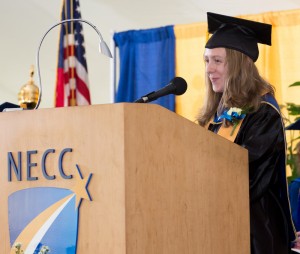 He says he often reflects on his own achievements and knows anything can be accomplished.

“So, you must do the same,” he told them. “Your journey has forged a stronger you. You must take your new hopes and dreams and work for them.”

His remarks followed NECC student commencement speaker Marie Phillips of Haverhill who graduated from the early childhood education program.  She told her fellow graduates that Northern Essex always made her feel like a “superstar”.

“The fact I always felt welcomed and supported in the college community has really inspired me to strive for great things,” she shared. I needed to follow my bliss. It certainly has not been an easy path. I have worked harder than I would have thought possible, but I wasn’t alone in my efforts.”

She said there were many individuals in her personal life and educational journey who picked her up and moved her forward. She will attend Salem State University in the fall. 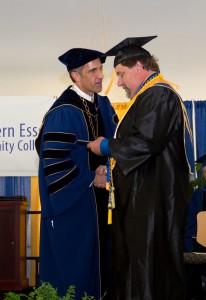 “So, the knowledge that I have gained through my life-experiences is this…do what makes you happy,” she says. “Follow your bliss, and build a life for yourself that leaves you feeling fulfilled at the end of the day.”

The commencement proceedings opened with the national anthem sung by NECC alumnus Ryan Thomas Jennings who graduated from NECC in 2010 with associate degrees in liberal arts: theater option and general studies.

Alumna Susan Bonefant, who is chairperson of the NECC Alumni Association, presented the Outstanding Alumni Award to former NECC baseball standout Manny Cabral of Tewksbury. The 2012 NECC graduate was recognized for his selfless act of donating his bone marrow to a woman suffering from a debilitating illness. He currently attends Daniel Webster College.

In presenting the award she said “He is the kind of person who serves as a constant inspiration and makes us all strive to lead by example.” 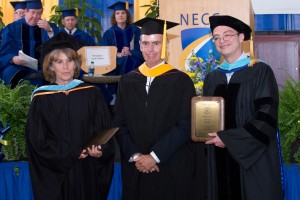 Emeritus status, which recognizes sustained excellence in performance, character, and meritorious service to the college,  was presented by William Heineman, NECC vice president of academic and student affairs, to Judith Kamber of Byfield, dean emerita of Professional Development; Thomas White of Boston, professor emeritus of natural sciences; and Cynthia Crivaro of Bradford, professor emerita of the behavioral sciences.

Lawrence Police Chief James Fitzpatrick, who attended NECC in the late 1980s before transferring to Salem State where he earned a bachelor’s degree in criminal justice, was awarded a Reverse Transfer Associate of Arts degree in General Studies based on the courses he completed at Salem State.