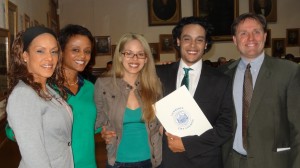 On Tuesday night, the Lawrence City Council presented Ismael Alvarez of Lawrence, who just graduated from Northern Essex Community College with a an associate degree in engineering, with a special citation based on his academic success and demonstrated leadership.  The citation was presented by Councilor Marc Laplante and Councilor Sandy Almonte.

He worked in that field while in high school and after his graduation, and was encouraged to go back to school and pursue his education in engineering a couple of years ago by his wife of six years, Katrice.

Alvarez says, he had an “awesome experience” at Northern Essex, calling it “like coming home.”

While at the college he earned high honors and an associate degree in engineering.  He also worked as a tutor at the college.  Alvarez, who graduated on Saturday, received the Excellence Award, which recognizes the graduate with the highest grade point average in the engineering program. 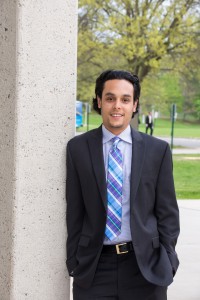 Alvarez has transferred to UMass Lowell where he is working on his bachelor’s degree in mechanical engineering.  After graduation, he’d like to work in a “cutting edge” field—he mentioned flying cars—which combines his background as an auto mechanic with his engineering degree.

While accepting the award, Alvarez credited his wife Katrice, who fully supports his college goals.  “I would not be able to do this without her support and encouragement,” he said.