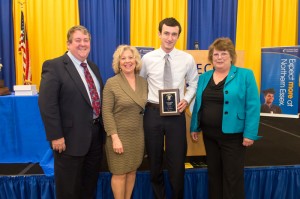 Each year the NECC Alumni Association presents this award for outstanding achievement to a graduating student who has distinguished him or herself through academic achievement and involvement in either campus activities or community service.

Despite working and taking five courses at a time, Lombardo had perfect attendance as well as a near perfect GPA.

“His participation in classroom activities were consistently fine, showing outside meticulous preparation and true understanding of the difficult concepts and problems presented in the course,” he wrote. His academic performance alone places him in the top five percent of students with whom I have worked at NECC and at other colleges.”

During his time at NECC, Lombardo served as President of the Beta Omicron chapter of the National Business Honor Society, Alpha Beta Gamma, and was an active member of the Honor Society Phi Theta Kappa. He is an Eagle Scout and prominent community volunteer in his hometown of North Andover. In the fall, he hopes to attend a four-year college and work toward a bachelor’s degree in business finance.

Northern Essex graduated nearly 1200 students who earned associate degrees or certificates. The 52nd commencement was held May 17 on the Haverhill campus. Lawrence Mayor Daniel Rivera was the commencement speaker.

He is transferring to Boston University in the fall where he will major in business management with a focus on finance.