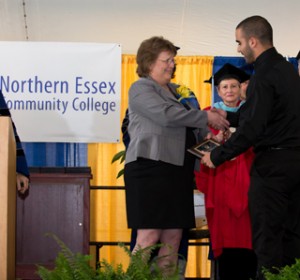 Somewhere, there is a woman recovering from life threatening aplastic anemia thanks to the bone marrow of Northern Essex Community College alumnus and baseball standout Manny Cabral of Tewksbury. His selfless act was acknowledged recently when he received the NECC Outstanding Alumni Award during the 52nd commencement ceremony.

The award is given annually to recognize a Northern Essex graduate who has achieved success in his or her career, is active in the community, and has given back to the college.

Cabral, was captain of the NECC Knights baseball team which he helped lead to state and regional championships as well as a trip to National Junior College Athletic Association (NJCAA) Division World Series in Texas. While at NECC he was a Rawlings Gold Glove winner and was named the Division III Defensive Player of the Year.

A 2012 graduate, he was offered a Division I scholarship to Texas Southern University. The summer before he transferred to TSU he was notified that he was a possible bone marrow donor. It was later confirmed and over his 2012 holiday break he underwent a surgical procedure to remove bone marrow. The bone marrow transplant was a success.

During the summer of 2013 he played Futures Collegiate League Baseball (FCLB) for the Nashua Silver Knights Coach BJ Neverett. He had such a positive experience he decided to transfer to Daniel Webster College where Neverett is coach.

In presenting the award to Cabral, NECC Alumna and chairperson of the NECC Alumni Association Susan Bonefant said, “Beyond his strong athletic drive, this year’s recipient demonstrates a remarkable spirit of selfless compassion… He is the kind of person who serves as a constant inspiration and makes us all strive to lead by example.”