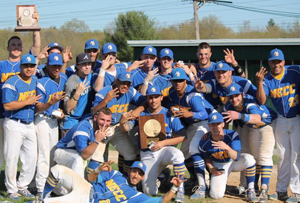 For the third time in as many years, the Northern Essex Community College Knights baseball team went to the National Junior College Athletic Association Division III World Series in Tyler, TX. They finished sixth in the country with an overall record of 21-14.  Last year they were eighth in the nation.

This was the fourth time in the college’s history that the Knights qualified for the World Series. Their first trip to the Division III World Series was in 2006.

The Knights started the series defeating Herkimer County Community College of New York 8 to 5. They advanced to play Tyler Junior College – losing 17 to 2 before bowing out of the series with a loss to Waubonsee, Illinois 4 to 1. Freshman Ryan McAuliffe of North Reading allowed only one earned run, nine hits and one walk while striking out four over nine innings.

For the season, Zachary Beckwith of Manchester, NH, led the team in pitching with a 1.723 ERA with 62.2 innings pitched, 41 strike outs and nine walks. Elmidio Crisostme of Lynn led the batting with an average of 389, three home runs, 28 runs and 18 rbi’s. Jonathan DelaCruz of Haverhill followed up with a .362 avg., 39 runs, 23 RBIs and 20 stolen bases.

Knights Coach Jeff Mejia was named Coach of the Year:

Gold Glove Players-of-the-Year went to Jonathan DeLaCruz of Haverhill, center fielder and the Defensive Player of the Year went to Dan Bonito of Swampscott, first base.

NECC Athletic director Sue MacAvoy says, “Northern Essex is a place where you become a better person and a better athlete.”

For additional information on NECC’s athletic programs visit the website.