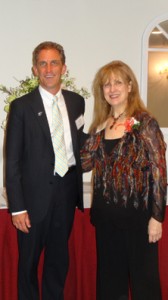 Northern Essex Community College English professor Terry Cargan of Haverhill was one of 13 women to be honored during the YWCA Haverhill’s 25th celebration of the Tribute to Women.

The awards luncheon was held Wednesday, May 28, at DiBurro’s Function Hall in Ward Hill.

Cargan has taught at Northern Essex for nearly 30 years. She has been passionate about advocating for women, especially those struggling with self-esteem issues. In the 1980s she taught a displaced homemakers’ program for women, which helped many women overcome their fears and go on to find jobs and support their families.

By her own admission, Cargan has had a lifelong struggle to overcome paralyzing shyness. Rather than run from the fear she approached it headlong. She deliberately selected a career that involved public speaking. In addition to teaching, she has served as chair of the NECC All College Assembly for the past 10 years regularly leading meetings that are broadcast between the Haverhill and Lawrence campuses.

She is a campus leader who has served on the Academic Master Plan Committee and on the college’s core team for Achieving the Dream, a national initiative focused on helping community college students succeed. She is also a volunteer judge for the English Departments bi-annual writing awards.

Bill Heineman, NECC vice president of academic and student affairs, described Cargan “As a campus leader and catalyst for change, specifically change that has a positive impact on our students, helping them to achieve their goals and dreams.”

For 25 years the YWCA’s Tribute to Women luncheon has honored women who live and work in Greater Haverhill and who have made a difference in the workplace and in the community. This year 13 honorees were recognized for their leadership, social commitment, and strength. They represent the health care, legal, banking, communications and social work professions. They are community activists and volunteers, educators, and small business owners.

Cargan holds a Bachelor of Arts in English Education from SUNY Albany and a Master of Fine Arts in Creative Writing from Emerson College.