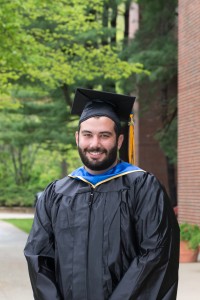 Northern Essex Community College graduate Daniel Peters has two great talents; one is pitching an accurate fastball and the other is inspiring first-graders. For the first talent he was named NECC male Athlete of the Year. For the second talent he received an NECC associate degree in elementary education.

This fall, the 20-year-old Salem, NH, resident will take his ball and his degree and head to Rivier College in Nashua where he will continue to play baseball while pursuing his bachelor’s degree in elementary education.

The 2012 graduate of Salem High School says attending Northern Essex gave him the opportunity to play baseball while finding his academic direction. If he ever wondered if elementary education was the right field for him, it was confirmed when, as part of his course work, he observed the first through fifth-grade classes in the Soule School where he attended school as a young boy.

The brawny, six-footer found himself right at home in the first-grade classroom.

“I find (first-graders) are really eager to learn at that age and participate in activities,” he says.

A fourth-generation vegetable farmer, Peters says teaching will give him the flexibility to work alongside his brother Matt (who is also pursuing teaching), dad, and uncle caring for the crops at Peters Farm during the summers. Farming is a family tradition he is eager to continue.

“I really love working outdoors. I love the physical labor,” he says.

Peters thinks time in the first-grade classroom will complement his farming lifestyle nicely. 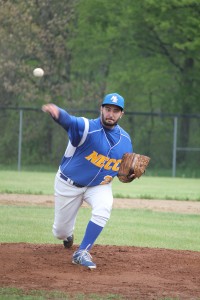 Northern Essex, he said, was instrumental in helping him create his life plan. As a standout pitcher known for his 80-plus mph fastball, Peters helped the team go to the NJCAA Division III World Series not once, but twice. In return, he got to travel to Florida on spring break and Texas for the World Series.

“I may not throw the fastest fastball, but my accuracy makes me successful,” he says.

Peters was as successful in the college classroom as he was on the pitcher’s mound. He graduated with a 3.6 GPA. In addition to earning the Male Athlete of the Year Award, Peters also received the Excellence Award in Elementary Education, which is given to the student with the highest grade-point average in a major.

Peters was one of more than 40 Salem, NH, residents to receive their associate degree or certificates during Northern Essex 52nd Commencement under sunny skies on Saturday, May 17. More than 1,000 students graduated.

Lawrence, MA, Mayor Daniel Rivera was the commencement speaker. He encouraged the graduates to embrace their success, celebrate, and then “get back to work” creating new goals and accomplishments.