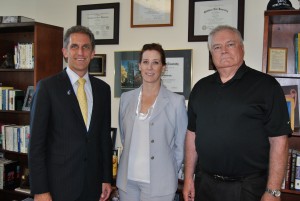 Scionti, who is director of business systems for academic and student affairs, is a five-year employee of NECC. She holds a bachelor of science in MIS from UMass Lowell. She is responsible for directing and overseeing the design and implementation of new business processes as they relate to technology systems within Academic and Student Affairs.

She was nominated by William Heineman, vice president of academic and student affairs and Tina Favara, interim dean of enrollment services who praised Scionti for being an “instrument of change for many of the units/divisions across the campus and very often the bridge between those same units/divisions.”

“The breadth and depth of Joan’s knowledge and experience relative not only to Business Process Management but simply her understanding of all the teams (and their work) across campus—including Financial Aid, Registrar, Admissions, Finance, Academic Affairs, Professional Development and everything in between—is truly extraordinary,” they wrote in her recommendation.

Chambers, an adjunct English professor who has worked at Northern Essex for more than 10 years, was nominated by several faculty and staff. NECC librarian Ann Grandmaison praised him for his easy going manner and love of the written word.

“Mr. Chambers is an amazing teacher and has an incredible rapport with his students. He has such enthusiasm for the subject matter that his students cannot help but become interested in literature. When he talks about his favorite authors, such as William Shakespeare or George Bernard Shaw, he speaks with an enthusiasm that is infectious. Time after time I have watched students become enthralled by his lectures.  During library instruction he is an actively involved participant. He involves the students in the library classes and makes these sessions memorable for his students.”

Margaret Pothier, NECC’s coordinator of tutoring services and writing center coordinator wrote, “As a writing tutor, Karl has a unique way of connecting with each student in the Writing Center.  He immediately recognizes the topic of a student’s essay, and relates it to a story from his own life or engages the student author to expand on ideas related to the topic.  Karl is often very funny and students feel comfortable laughing with him about absurdities ranging from “dire misspelling mistakes” on their papers or references to popular cult movies or shows, such as zombies in The Walking Dead.  Students leave the writing center feeling more positive about their writing and the writing process, as well as entertained from a tutoring session.”

These nominations were supported by Lynne Nadeau, director of NECC’s tutoring services, who lauded Chambers for his student interaction. “He is knowledgeable, reliable, student-centered, and entertaining. For many students, he has become a favorite tutor due to his warm, yet no-nonsense, manner; Karl lets students know that they CAN do the work, but they MUST do the work. On many occasions, Karl has tutored students when he is not on the schedule, simply because he is in the Tutoring Center and the students need help. And Karl makes NECC’s students feel comfortable, not an easy task in a writing consult. His tutoring sessions are often punctuated by raucous laughter – both his and the students’.”