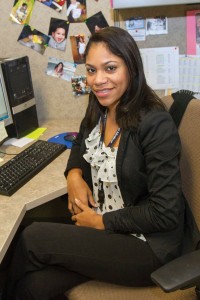 Rosaria Morel knew she needed the education and specialized job skills to make her more marketable to employers. After moving to the United States from the Dominican Republic on her own in 2008, she began working in a local restaurant. In 2010, she enrolled in Northern Essex’s Associate of Science in Business Transfer Program.

Eager to improve her skill set and make her resume more attractive to employers, Rosaria attended an information session at Northern Essex in 2012. Intending to enroll in the Radiologic Technology Program, she had a quick change of plans when she learned the program was only offered during the day. With an infant at home, a full-time job in a restaurant, and no local family support, she needed night classes to make it all work. When she learned about iHealth@NECC, where most courses are offered online, she knew she had found what she needed.

“I was so happy when I learned about the program,” says the 27-year-old.  “The class schedule was flexible and worked for me.”

Rosaria quickly enrolled in the Medical Billing Certificate Program and began taking a combination of online and locally-offered night classes that fit her already-demanding schedule. As part of her iHealth program, she interned at Pentucket Medical Associates (PMA) in Lawrence, and was offered a full-time data entry specialist position after completing the internship.

“The best thing about the iHealth program was coming out of it with a job,” raves the Lawrence resident, who received her Medical Billing Certificate in the spring of 2013.

With a certificate from iHealth@NECC under her belt and a secure job at PMA, Rosaria continues her journey toward her associate degree. She plans to transfer to UMass Lowell in the spring of 2015 to pursue a bachelor’s degree in business administration, and ultimately work as a business administrator at PMA.