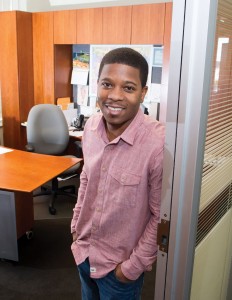 While others might bow under such pressure, this 29-year-old Amesbury resident seems to thrive. NECC, he said, is helping him plan the rest of his life.

Admittedly, the father of two says the North Shore is a long way from the streets of Detroit, Michigan, where he grew up. Streets, he said, that offered nothing but trouble. Following high school graduation, Thomas enrolled in a Michigan community college and accepted a job parking cars. He spent little time in the classroom, as most of it was spent on fun and friends.

At 23, Thomas moved to Newburyport with his mom, his fiancé, and their infant daughter and left his street life behind. He job hunted and found a position with an executive vehicle relocation company. Starting in customer service nearly six years ago, he has since received promotions into the company’s sales force.

Quickly, Thomas realized he could excel in a business environment and just as quickly his wife encouraged him to return to school. He enrolled at NECC in January of 2012 and has been taking two or three classes each semester. He hopes to graduate in 2015.

“I knew I wanted a business degree. It offers mobility in life and the business world,” he says. “I knew the value of the degree.”

He was pleasantly surprised with his own academic performance (3.9 GPA) and equally as surprised by the support he received from faculty and staff.

“The professors are quick to encourage you,” he said. “They have made my journey possible. Their high expectations for all of their students encouraged and challenged me, and their understanding of our lives outside the
classroom allowed me to stay motivated.”