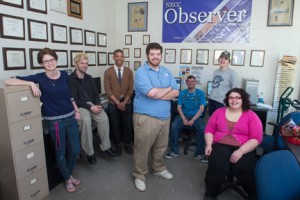 Matt Gingras of Amesbury served as editor-in-chief during those two semesters.

“We were really pleased to receive this award,” says Gingras. “The paper received a silver award last year, so it was nice to receive the gold.”

The NECC Observer is an award-winning newspaper published by NECC journalism students. The Observer is published twice monthly during the academic year.

The Observer is a member of the Associated Collegiate Press and the New England Press Association.