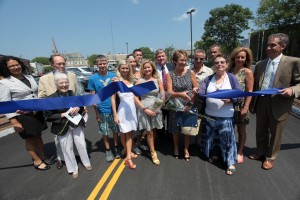 On Wednesday, July 23, the college recognized her contributions by dedicating a new Lawrence walkway and parking area in her name.

“Based on Marjorie’s interest in Lawrence, I think she would be quite pleased to see how the college has grown in the city,” said NECC President Lane Glenn, who described the college’s now five locations in the city, including iHealth on Franklin St., 420 Common Street, and NECC Riverwalk in addition to the El-Hefni Center and the Haffner Fournier Education Center.

A leader at Northern Essex for almost 30 years, Goudreault helped shape the direction of the college, including its expansion in Lawrence. 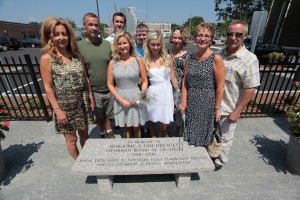 She was a member of the college’s Advisory Board from 1969 to 1979, serving three years as chair of the board, and she was chair of the Board of Trustees from 1981 until her retirement in 1997.

Goudreault’s passion for and commitment to the college was personal:  three of her nine children graduated from Northern Essex.

In 1997, Goudreault was recognized as the most outstanding community college trustee in the country when she was the recipient of the M. Dale Ensign Trustee Award given by the Association of Community College Trustees.
Goudreault, who also served on the Haverhill School Committee and City Council for more than 20 years, passed away unexpectedly in 2005.

Carolyn Morton, Esq., a close friend of Goudreault’s who served with her on the Board of Trustees, spoke as part of the dedication program, sharing memories of initial meetings in Lawrence, where plans were made for the Lawrence Campus.

“The college’s first building in Lawrence happened as a result of the leadership of Marjorie and John Dimitry, who was president of the college at the time,” said Morton.  “She was very involved with securing a campus in the city and with selecting the programming that would be offered there.”

Morton told stories about Goudreault’s vision, energy, honor, leadership, and her quest for the closest and most convenient parking space, no matter how long it took. She invited Bill Moynihan, who is currently chair of the college’s board of trustees to the podium, and, accompanied by laughter from the audience, which included family, former trustees, and friends, presented him with a hand printed sign that read “reserved parking chairman of the board of trustees.”

Morton made a significant donation to the college, which covered much of the work that was done to create the Marjorie Goudreault walkway and parking area.

Also speaking as part of the program were President Glenn, Chairman Moynihan and Bill Cox, who is a current member of the college’s board of trustees and also was a close friend of Goudreault’s.

Special guests at the event included all of Goudreault’s seven living children and former NECC President John Dimitry and his wife Audrey.

When asked what personal qualities contributed to her mother’s success, Julie Reynolds said “She was very smart, organized, and compassionate.  She was passionate about what she believed in and when you have passion it all works out.” 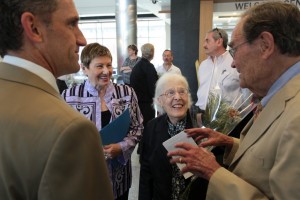