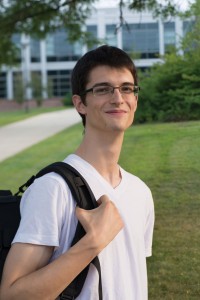 This program has already helped him secure a job with promised job advancement once he graduates in May.

As a boy growing up in Serbia, the Haverhill resident never imagined he would be writing his American dream.

Milovan was six when he and his family fled the Serbian Civil War in 1999. They arrived in Boston under a federal refugee program unable to speak English. He attended ESL classes and by the time he entered middle school he was fluent in English.

He was not a serious student, he admits, until the end of high school when he ramped up his academics, enrolling in Advanced Placement Calculus and Physics and dual enrollment classes with UMass Lowell. Following his 2011 graduation from Beverly High School he enrolled in a four-year college. Though he had the motivation, he didn’t have the funds to continue.

Back in Beverly he met his future wife Zuleyka, whose ambition matched his own. She was attending NECC and encouraged him to enroll because it was affordable.

“Northern Essex is less expensive than four-year schools, yet the quality is great,” he says. “It really comes down to how much you are willing to study.”

Milovan, who holds a 4.0 GPA, was hired as a test technician at BAE, a defense contractor. “While working at BAE I continue to develop my experience which will go a long way when I start working toward my bachelor’s degree,” Milovan says.

Once he graduates in May he will be promoted to engineering assistant. Milovan says his “ideal” job is field engineer, a position he aspires to and one he hopes will involve travel.