Scholarship is Created in the Memory of NECC History Professor 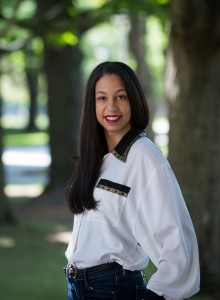 Yosmarlin Infante of Haverhill, a Northern Essex Community liberal arts major, is the first recipient of the John B. Guarino Memorial Scholarship, created in the memory of NECC Professor of History Emeritus John Guarino.

A long-time resident of Haverhill, Professor Guarino joined the Northern Essex faculty in 1964, three years after the college was founded. He taught at the college for 32 years until 1996.

He was well known as a brilliant and gifted teacher, one who loved “watching his students pass the boundaries that they thought constrained them,” according to Dr. Paul M. Bevilacqua, the college’s vice president emeritus of academic affairs.

He was also an energetic campus leader, a champion for faculty rights and academic freedom, and served as president of the faculty union, a member of the college’s budget committee, and a leader on the academic and all college councils.

Guarino received his B.A. from Brandeis University and his M.A. from the University of Michigan. He passed away in 2013 after a long and brave battle with cancer.

A 2012 graduate of Haverhill High School, Yosmarlin Infante had no idea what she wanted to major in when she arrived at Northern Essex in the fall after graduating from high school. She credits the PACE program at Northern Essex, a federal funded program for disadvantaged students, with helping her to find direction.

“It was in the middle of math class my freshman year when I realized I wanted to be working in the film industry,” she says. “The Pace Program helped me to organize my goals. I visited colleges with PACE and learned how to access scholarships.”

The first in her family to attend college, Infante is paying for her own education with the help of financial aid. “This scholarship will help me pay for my books and classes, and reduce the amount of loans I’ll need,” she says.

After graduating from Northern Essex in December, Infante plans to transfer to Fitchburg State where she will major in film production.

The John Guarino Scholarship is an endowed scholarship which will be awarded annually to an associate degree student who has an GPA of 3.0 or above and has completed at least 18 college level credits. The scholarship was created through donations from Professor Guarino’s colleagues, friends, and family.

For more information about creating an endowed scholarship at Northern Essex, contact Jean Poth, vice president of institutional advancement, 978 556-3624 or jpoth@necc.mass.edu or visit the website necc.mass.edu/giving.